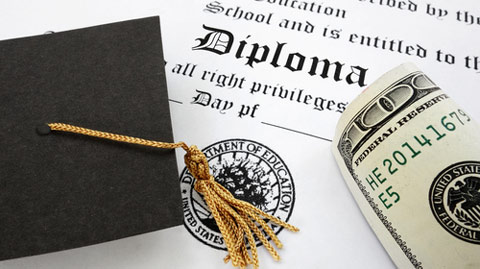 This month President Obama issued a directive that will penalize “for-profit” trade schools because students are amassing huge levels of debt they can’t pay off. According to the President and the Department of Education these specialty training schools promise to train students and prepare them for a career in everything from computer design to personal training. But when graduates get out of school they often lack the skills necessary to land the high paying jobs they were promised, leaving many without the income to service their loans.

The proposed regulations would penalize career oriented programs that produce graduates without the training needed to find a job with a salary that will allow them to pay off their debt. Schools, for-profit or not, that don’t comply would lose access to the federal student aid programs.

“Today, too many of these programs fail to provide students with the training that they need at taxpayers’ expense and the cost to these students’ futures.”

What President Obama won’t tell you is that it’s not just trade schools that promise young and optimistic high school graduates a future full of big money and easy living. And though most universities claim they are non-profit pedagogic institutions whose goal is to serve and mold young minds for the future, the fact is that there is a ton of money to be made by everyone involved including teachers, administrators, banks and periphery industries that service colleges.

According to a new documentary from Crush the Street obscene debt levels are being amassed on all levels of secondary education – even if the college in question is not “for profit.”

If you have kids entering college, in college, or graduates living with you at home, the following documentary is one you’ll want to share – just so they know exactly how they’ve been brainwashed into believing that the road to success requires a degree. Moreover, it reveals the reasons for why college education costs are sky rocketing, as well as the end result of the trillion dollar bubble that is sure to pop in coming years.

A Must Watch For Anyone Entering Higher Education: The College Bubble

The official fiscal year 2010 default rate was 14.7% and we can only expect that to be higher for the following years. No one but the government would guarantee a loan for anyone to go to college, for any curriculum with little regards for the likelihood of the individual to repay the loan.

The government gladly invests taxpayer dollars into student grants and loans. This is what has been driving the increase in college tuition bringing it above and beyond the average student and family.

For teenagers the propaganda is so potent that high school students in many cases have blind optimism that they will land their dream career after college and have the income to easily pay off any loan balances occurred along the way.

Some graduates are left with over 100,000 in debt and can barely find any job, let alone the one they pictured themselves getting into four years ago.

For starters, we are now living in a new economy, much different from the one our parents and grandparents experienced after World War II. Many of America’s high paying jobs have been outsourced to foreign countries. Manufacturing has been shifted to slave-labor economies like China. The majority of jobs left in America are low-paying, minimum wage labor. So the competition for the few high paying jobs remaining is extremely fierce.

This is why a huge percentage of American adults – nearly 30% – are living with their parents, and that includes graduates who just got out of school with tens of thousands in debt.

The government interference that caused home prices to rise ahead of the 2008 financial crisis and saw more people buy homes than ever before, is the very same effect we’re seeing in college education.

We all remember how that ended up.

College tuition cannot rise indefinitely. Eventually something will cause the great college bubble to pop.

Outstanding student loan debt is over $1.2 trillion. This is nearly 50% higher than outstanding credit card debt.

The longer the status quo is kept, the bigger the bubble is going to get… and thus the larger the crash will be.

In the coming years student loan payments will get so high that it’ll be unmanageable… even for the students that get the dream job that they were told their degree would award them.

Massive defaults will occur and colleges will soon be worse off. Prices will need to be readjusted to maintain the maximum income when attendance levels crash. Professors will face pay cuts or layoffs, along with administration, maintenance, construction and anyone else working for or at a college or university.

As an example, take a high school graduate who wants to become a teacher. She’ll spend four years in school and take on around $80,000 of debt. When she gets out of school, she’ll make around $35,000 a year. At that rate it would literally take her two decades to pay off her loan. Others might not be so lucky and will end up shackled with debt for their entire life, or they’ll simply default. Consider a liberal arts major who, in essence, is being trained for a “career t”hat produces a service that the majority of Americans won’t have the money to pay for. How will this individual pay back tens of thousands of dollar in debt?

The simple answer? They won’t.

There are certainly jobs out there that require higher education. But even those industries, such as the medical field, are being gutted from within.

This is just another example of what happens when government gets involved in the free market. Overblown prices, life-long debt commitments, and a future of destitution is what college graduates can expect over coming decades.

What high schoolers don’t realize – and many will never be taught under Common Core’s curriculum – is that the key elements for success are, among other things, self-education, focus, adaptability, resilience, persistence and an optimistic attitude. You know, all of those things that made America great to begin with. A college degree is secondary.