Post-Paris American Police State Once Again In Vogue: “We Can Crush ISIS Enclave of Terror” 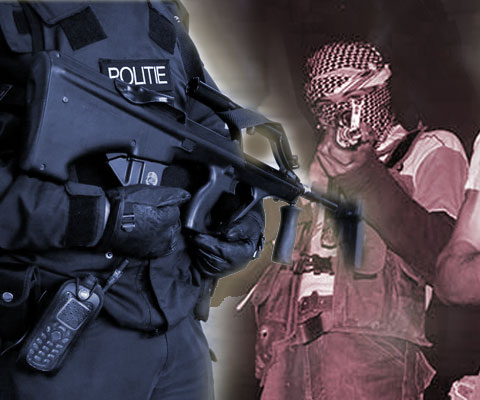 It seems that the only response to terrorism is more surveillance, security, police presence and, of course, war.

Ignoring the lessons of blowback and escalation that have played out for many years now, the major powers of the world are broadcasting fears and preparing to clamp down on society in response to renewed threats from ISIS and other terror organizations.

None of it will stop potential attacks from happening, but it will firmly entrench the authority of police and other officials to suspect anyone and sidestep the law when a threat is felt.

Take a look at how terror and fear have gripped headlines and taken over the news cycle, and ask yourself who benefits from this: 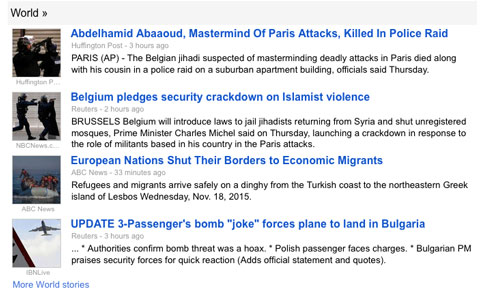 Although officials have admittedly not stopped any attacks from happening, the system is self-assured in its show of force – with SWAT-style police forces clad in all black hunting down suspects and locking down streets in Paris, Belgium and other parts of Europe.

The Daily Mail highlighted some of the most recent threats, along with just one of the several suspicious persons found at or near major security concerns, including the Pentagon, and in a separate case, the LAX airport:

Washington D.C residents were left on edge after an internal police alert about four Middle Eastern-looking men ‘acting suspiciously’ in the Pentagon metro station was leaked just two days after ISIS announced the capital was their next target.

On Monday, a chilling video emerged of ISIS warning that countries taking part in air strikes against Syria will suffer the same fate as Paris.

They also said they would hit the U.S capital next.

The specific threat against the US capital emerged as CIA director John Brennan warned that more atrocities will be committed against the West by the Islamist terror group.

With New York and Washington, D.C. once again named as terrorism targets, police are gearing up in the homeland as well. It is a bittersweet reminder that the atmosphere that enveloped America for many years after 9/11 will not fade away, but remain a part of our culture. Unless someone cuts through this madness, the attacks on civil liberties will only deepen, and the national conversation will be all too centered on false promises of liberty-through-security.

Hillary, for one, who effectively has the Democratic nomination in hand, is using the occasion to vow a hawkish stance on the Middle East, though her previous meddling as Secretary of State did much to stir the violence and chaos that has swept over the region.

“The United States has been conducting this fight for more than a year; it’s time to be begin a new phase and intensify and broaden our efforts,” Clinton told the Council on Foreign Relations in New York.

“We should have no illusions about how difficult the mission before us really is … but if we press forward on both sides of the border, in the air on the ground and as well as diplomatically, I do believe we can crush Isis’s enclave of terror,” she added.

[…] She also said the US should arm Sunni tribes and Kurds in the country if the government in Baghdad refused to.

But Clinton called for further US special forces to be deployed to Syria too, reiterated her call for a no-fly zone and demanded an “intelligence surge” to allow the airstrikes against Isis to be stepped up. “We have a lot of work to do to really decimate Isil in Iraq and Syria,” she said, using an alternate name for Isis.

The words hold an ominous tone for what may be coming in the next four years of the presidency.

Yet it is not unique to the ambitious Hillary Clinton – indeed, there are few voices in government calling for restraint, and every sign that more attacks are forthcoming on all sides.

These developments in terrorism are textbook Hegelian Dialectic, using problem-reaction-solution to justify a greater military presence in Syria and Iraq, despite nearly a decade and a half of fighting jihad, civil war and supporting “frenemies” across the region with arms, training and financial support.

The founding fathers warned of this, but could scarcely foresee the cynical nature of today’s police state – where the terrorists created by the state have become the population’s worst nightmare.

In one variation of the statement, Benjamin Franklin wrote: “Any society that would give up a little liberty to gain a little security will deserve neither and lose both.”