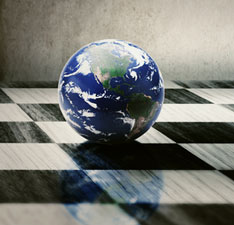 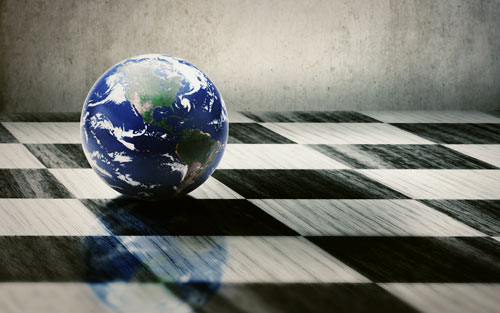 Most readers have been watching, as the U.S. and Russia seem to be positioning themselves along Cold War lines.  The posturing is not confined to maneuvering military assets; it also runs along economic lines, in which most warfare is at least based if not a major or the sole impetus.  Each power has sought to cement its claims/presence in areas bordering the sphere of influence of, or the actual territory of the other power.  Such posturing can be dangerous and lead to an incident that escalates into the uncontrollable.

Recently the news media has been abuzz with the Russian fighter aircraft buzzing the U.S. in the face: first the incident with the two fighters coming within 30 feet of an American naval vessel, and another separate incident involving aerial theatrics around a U.S. reconnaissance aircraft (a Boeing RC-135 intelligence-gathering spy plane).  The U.S. responded in kind on April 20 by allowing a guided missile destroyer, the U.S.S. Cook to encroach upon Russian borders while conducting maneuvers near Poland.  The U.S. claimed that Russian aircraft were doing fly-by’s to intimidate the destroyer.

Unlike the puissant response by John Kerry, feigning anger and doing nothing with the Russian aircraft incidences of the past two weeks, Russia is not playing with the destroyer incident.  The Russian ambassador to NATO, Alexander Grushko is reported by Reuters to have made the following statement:

“This is about attempts to exercise military pressure on Russia.  We will take all necessary measures, precautions, to compensate for these attempts to use military force.”

This statement by Grushko was not limited to the incident with the Cook.  NATO Secretary General Jens Stoltenberg has affirmed in the past week the intention of NATO to deploy command and control centers in Bulgaria, Estonia, Latvia, Lithuania, Poland, and Romania.  Exercises are currently being planned and prepared in Estonia by NATO air assets, to include participation by Sweden and Finland, both non-NATO members.  The exercises are scheduled to commence on April 28.

Although the exercises are superficially being dubbed maneuvers to help with control of civilian airports and coordination with them during “an emergency situation,” in reality they are both posturing and stationing aircraft on Russia’s western flank.  Also, the mainstream media barely mentioned the fact that last month, NATO fighter aircraft approached a Russian aircraft carrying Sergei Shoigu, the Russian Defense Minister who was en route to inspect military facilities and readiness in Kalingrad, toward Russia’s western border.

Much has also been mentioned by NATO of Russian “aggression and encroachment” regarding Ukraine, still beset by more than a year of fighting in its eastern region between Ukrainian forces and ethnic Russian separatists.  NATO has condemned Russia for supplying these separatists with equipment, materials, and personnel.  Russia has responded to this accusation by declaring eastern Ukraine to be mired in a civil war.

There are also underlying economic issues to all of this.  As mentioned in previous articles, the entire involvement of NATO wanting to “assist” Russia in her support of Syria was nothing more than an attempt to oust Assad.  This, in turn took a back seat to the desires of NATO and the U.S. to annex a portion of Syria in order to enable a natural gas pipeline from Qatar into Western Europe for the purpose of negating Russia’s Gazprom from supplying Western Europe with natural gas.  Basically, the Russians solidified Assad’s position, bombed the insurgents into submission, left supplies and advisers with Assad, and withdrew from the board.  The U.S. was left stultified with egg on its face.

Now the BRIC nations are starting their markets up in earnest, backing their currencies with gold and trading in Shanghai, China, and Moscow in Russia.  These two nations, incidentally are #1 and #3 respectively regarding gold production.  The former produced 490 tons in 2015, and the latter put out 295 tons that year.  The two nations account for 25% of the gold production for the world.  Those are staggering numbers.  In addition to production, China and Russia have been building up their reserves of gold astronomically.

They are ranked 5th and 6th respective to gold reserves.  The U.S. is listed as “#1” but this is another faux pearl attached to others on a string, such as phony employment numbers and the inflated GDP as reported by parrots of the media and business insider networks who are, in reality inside of the pockets of the administration and the Federal Reserve.

Another point of interest that may have a great effect is that Congress is in the midst of passing legislation to hold Saudi Arabia partially accountable for the 9-11 attacks.

The Saudis responded with informing the state department that they will call in assets and all accounts payable if that is the case.  This could really domino and also spell an immediate end to the Petrodollar.  Wouldn’t that be interesting?  Congress would hit the Saudis up with a bill, and the Saudis would pay us in “fiat” Federal Reserve notes, maybe cutting off the oil supply as well.  Payment of the bill then may as well be in toilet paper.

To summarize, akin to ancient Rome, the United States has over-extended herself.  She has created a climate that could easily be transformed into a war on a slight pretext.  Wars, as it is well known are also a means a nation can extricate itself from debt and financial responsibility.  The dying Petrodollar system has been on life support for some time, and it appears other nations such as the BRIC’s are taking the initiative to return to a true monetary standard.  This is the same gold and silver standard that the U.S. should never have left in the first place.