Pope Francis said that the world is already in a third world war. The comment was made in reference to Ukraine but he warned that similar conflicts will be fought piecemeal over time.

“Tomorrow you will remember the anniversary of the outbreak of World War II, which so painfully marked the Polish nation,” the pope said Wednesday. “May the memory of past experiences urge you to cultivate peace in yourselves, in your families, in social and international life.”

The pope referred to the current era as the “third World War,” saying the overarching conflict will most likely play out piecemeal, unlike previous global wars, according to Vatican media.

Back in 2018, the pope warned that a nuclear war was coming:

The Pope’s WW3 Warning: The World Is At ‘The Very Limit’ Of Nuclear War

But when asked if he was worried about the possibility of nuclear war, Pope Francis said: “I think we are at the very limit. I am really afraid of this. One accident is enough to precipitate things.” –SHTFPlan

The pope has stepped in often and has used politics to help convince the masses to do something. Take, for example, a 20-euro coin. This coin shows someone getting a vaccine. Not just any vaccine too. This is a coin that has a description that specifically commemorates the COVID-19 vaccines. 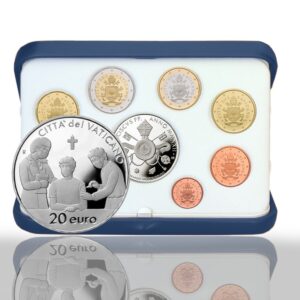 The 20-euro silver coin, designed by Chiara Principe, is dedicated to a current theme that is very close to Pope Francis’ heart: treatments to counter the pandemic and the need to be vaccinated. The coin depicts a doctor, a nurse, and a young person who is ready to receive the vaccine. The Holy Father has repeatedly stressed the importance of vaccination, recalling that healthcare is “a moral obligation”, and it is important to “continue efforts to immunize even the poorest peoples”. -Commercializzazione Filatelica e Numismatica

He’s also been incredibly ignorant on economic issues before:

What’s ironic about the pope blaming capitalism, or the free market, for world hunger, is that he’s the head of one of the most powerful organizations on the globe: the Vatican.

The Vatican economy minister, Father Juan Antonio Guerrero, said the Vatican’s total net assets in 2019 were about 4 billion euros, which is believed to be the first time any such figure has been given. -Reuters

We are only in a war if people choose to obey the ruling class and fight in one. If no one fights, there is no war. The pope could be encouraging peace, not selling fear to the masses.