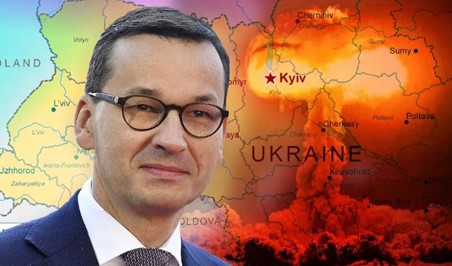 This article was originally published by Kurt Nimmo at The Ron Paul Institute for Peace and Prosperity.

Has Mateusz Jakub Morawiecki, the PM of Poland, lost his mind? It would seem so. He is basically calling for WWIII while claiming he is trying to avoid it.

PM @MorawieckiM in #Berlin: The defeat of #Ukraine may become a prelude to World War III, so today there is no reason to block support for Kyiv and postpone matters indefinitely. I call on the German government to act decisively by supplying all sorts of weapons to Ukraine.

— Chancellery of the Prime Minister of Poland (@PremierRP_en) January 16, 2023

It should be obvious by now that pouring more military armaments into the USG-initiated conflict in Ukraine will result in a reciprocal response by the Russian armed forces. Russia’s SMO is tasked with disarming neo-Nazis and preventing them from killing the innocent people they hate in eastern and southern Ukraine. Period. Everything else—Russian invasion of Europe, Russian meddling in USG elections, Putin’s cancer—are deceptive elements of the Big Lie.

Morawiecki was awarded the Order of Prince Yaroslav the Wise, a medal for “distinguished services” in the name of the Ukrainian state. Nancy Pelosi also received this award, as did a number of other foreign politicians supporting the coup government and its ethnic cleansing neo-Nazis committed to mass murdering Russians and other “Untermenschen” minorities. Zelenskyy passed out these awards like hotcakes, desperate to flatter panhandling targets and wheedle more missiles, tanks, and cash out of the West.

The more arms the USG and Europe send to threaten Russia and kill its soldiers, the more Russia will respond by targeting Ukraine with kamikaze drones, Iskander ballistic missiles, Kh-22 missiles, Kalibr cruise missiles, P-800 Oniks, OTR-21 Tochka missiles, etc., and they will do so until the threat is eliminated.

It will be a fight to the last Ukrainian—and maybe the last European.

Meanwhile, the Europeans seem to be suffering from severe brain fog. Less than half of polled Germans oppose sending Marder fighting vehicles to neo-Nazi ethnic cleansers.

In America, far away from the battlefield, the average person has largely bought into the various Big Lies about Russia. Good Guy vs. Bad Guy polarization and 24/7 propaganda have worked like a charm. Large numbers of Americans believe the neo-Nazis are in Russia, not Ukraine. They know nothing about the history of Ukraine and Russia, the relationship between the two, or the tribal conflicts that have arisen over the centuries in Eastern and Central Europe.

I have a small offering for these know-nothings.

In the summer of 1914, Gavrilo Princip, a Bosnian separatist member of a secret Serbo-Croatian underground group of assassins, Mlada Bosna (Young Bosnia), assassinated Archduke Franz Ferdinand of Austria and his wife, Sophie, Duchess of Hohenberg, in Sarajevo, the capital of Bosnia-Herzegovina, then annexed by the Austro-Hungarian empire. This event precipitated a political crisis that resulted in the “Great War,” one of the bloodiest wars in history. It claimed the lives of an astounding 40,000,000 people. This death toll would be overshadowed by WWII 2, in many ways a follow-up to the First World War. More than 60,000,000 people were sacrificed in that war, which ended in a nuclear attack on Japanese civilians.

The death toll in WWIII will be dramatically higher. It very well might be a life-terminating event.

Between the USG, Russia, and lesser nuclear powers, there are around 15,000 nuclear weapons. 100 of this obscene number “would easily result in a nuclear autumn and likely result in a nuclear winter, where the global temperature would drop because of soot from nuclear blasts blocking the sunlight from reaching Earth’s surface,” explains IFLScience, based on a peer-reviewed study from Michigan Technological University.

If WWIII does in fact occur and a semblance of civilization survives in its horrific, thermonuclear wake, the likes of Morawiecki, and his fellow travelers in Poland and America—specifically the neocon criminal organizations—will hopefully be dealt with posthaste in a crimes against humanity tribunal.