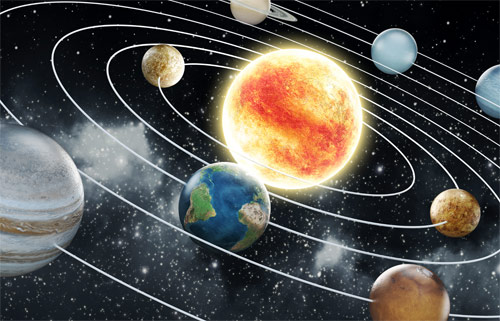 The discovery of a new dwarf planet called “The Goblin” is redefining our solar system. The planet’s massively elongated orbit suggests object is influenced by theoretical giant Planet Nine (Planet X) in the Oort Cloud region.

Planet X, an as-of-yet unseen world could be shaping the orbits of smaller, extremely distant objects like the newly described 2015 TG387, nicknamed “The Goblin.” The Goblin is likely spherical and about as wide as the state of Massachusetts. And much like a handful of other distant solar system inhabitants, its orbital behavior might signal the presence of Planet X lurking in the distant outer dominions of the solar system.

The Goblin is the third minor planet to have been found in the outer solar system, following the discoveries of Sedna and, recently, another object called 2012 VP113. This region, which was once thought of as a cold, dark, and empty realm now appears to be a rich collection of exotic and extreme objects. And these three planets may be just the beginning of the discoveries.

“We are only just now uncovering what the very outer solar system might look like and what might be out there,” said Scott Sheppard of the Carnegie Institution for Science in Washington DC and a member of the team which located The Goblin. “We believe there are thousands of dwarf planets in the distant solar system. We are just seeing the tip of the iceberg right now.”

Doomsayers have been warning of Planet X (or Wormwood, or Planet Nine) for years, however, most of their prophecies include a collision with Earth or a conspiracy to hide the planet’s existence from the public. But it appears that the discovery of The Goblin has even scientists wondering what else is out there beyond the far reaches of our solar system. “Every small object we find that is isolated like this will bring us closer to finding the planet,” said Scott Sheppard. Sheppard also reported the finding in a notice distributed by the International Astronomical Union’s Minor Planet Center, according to The National Geographic.

The newly discovered small icy world is in an extremely elongated orbit. At its closest, it gets about two and a half times as far from the sun as Pluto and then it heads off to the outermost fringes of the solar system, to almost 60 times further out than Pluto, taking an astounding 40,000 years to loop once around the sun. For 99% of its orbit, it would be too faint to see, according to a report by The Guardian.

Konstantin Batygin, assistant professor of planetary science at Caltech, who has worked on theoretical simulations of the hypothetical Planet Nine, described the latest observations as a “great discovery indeed.” He added, “Despite centuries of surveys, our understanding of the solar system remains incomplete,” he said. “This certainly adds to the growing ledger of … objects that show Planet Nine’s influence.”