Phil Sloan: The Financial Crisis Will Be ‘A Shock To This Country. It Will Be Chaos’ 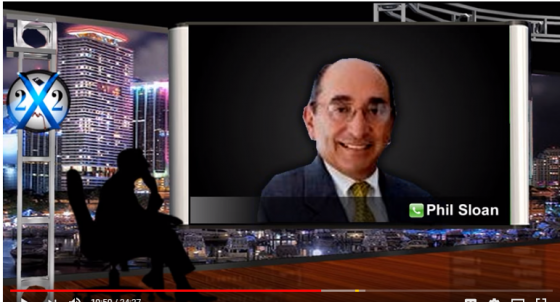 Phil Sloan has been in the Investment business since 1962 and he’s sounding the alarm for those willing to listen.  He is saying “prepare yourself; your way of life in the United States is about to change.”

Sloan was the Managing Director of Fox Asset Management, a subsidiary of Easton Vance at Fox. He was also on the Investment Committee, the Strategy Committee, and the Management Committee. Sloan was also the Vice President of PaineWebber (now UBS) Investment Consulting services and worked with financial advisors nationwide, setting Investment Policy, Asset Allocation, hiring outside managers, and monitoring results. As if that wasn’t enough, Sloan was also the Vice President consulting services for Merrill Lynch.  It’s safe to say he may know a thing or two about the financial crises (both past and future) in the United States.

Sloan was recently interviewed by the X22 Spotlight, and he is asking people to prepare themselves now for what’s coming.

Sloan says the economy is moving at a snail’s pace, but that isn’t all. He expects that at some point we (the US economy) will run out of gas. He says that pension problems are headed our way. “Pensions have problems because they were never funded properly and the idea that somebody could retire and get paid their full compensation for 20 or 30 years is a ludicrous concept. So, therefore, now that you have an aging population and they have all these crazy schemes built in that ‘we’re gonna pay you for the next 20…25 years at your full salary..there’s just no pension in the world that can do that. ”  Pension issues are becoming a problem.  Many states are struggling with these unfunded liabilities.

“The pensioners are going to wake up one day and get an email or a phone call or whatever, saying ‘by the way, you were supposed to get 100 bucks, but unfortunately, we don’t have enough money, so you’re going to get 50 bucks’…60 bucks…40 bucks…or whatever their number is. I can’t tell you what that number is, but it’s not going to be 100.”  Sloan goes on to say that the United States is $20 trillion in debt, so governors that seek to pad pensions with money from the treasury are going to be massively disappointed.  Sloan also says that if anyone ever approves funding pensions this way, the US will become Zimbabwe.  “There is no way to pay these Ponzi schemes,” Sloan said.

When Sloan was asked about his take on the elites keeping gold down, he said:

“…it’s some central bank trying to disrupt the marketplace. If you look around the world, the Chinese central banks are getting gold reserves. The Russian central bank; getting gold resesrves. So, they want to have a currency system, a payment system, whatever you wanna call it, that’s based on real money. Gold has been around for thousands of years and has always had value.”

Sloan was also asked what happens in the United States when the dollar system finally breaks apart, which it will do inevitably. Sloan said:

“Inflation will come back rampantly in this country, and we will be, you know, having this real problem of potentially hyperinflation to deal with.  Because if the dollar goes down by 25%, and you are, you know, China or Europe or whomever, selling goods to the United States, you’re no longer gonna say ‘well, I’m gonna accept the dollar, you want a dollar and a quarter, a dollar and a half, a dollar and three quarters, etc. So, I think, if inflation comes back, it will affect everybody in a very negative way. AND, we will no longer be able to live beyond our means…Which is going to be a shock to this country….it will be chaos.” -Phil Sloan