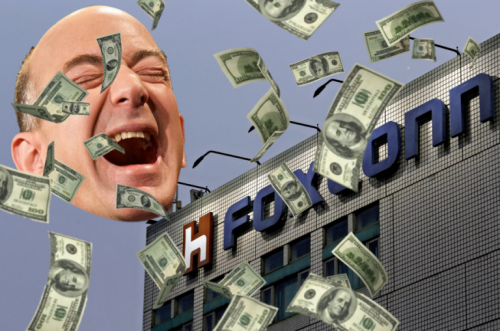 Amazon founder and CEO Jeff Bezos recently became the world’s wealthiest man. While Bezos’ fortune is mostly tied to Amazon’s inflated stock price trading at a nosebleed price/earnings ratio of approximately 265, with a market cap around $811 billion (as of June 08), many questions remain as to just how did Bezos manage to become the world’s richest man by disrupting America’s retail industry?

New evidence from the New York-based China Labor Watch released a report over the weekend following a nine-month back-breaking investigation of working conditions at a manufacturing plant in the city of Hengyang operated by Foxconn Technology Group, which manufactures products for Amazon, including Amazon’s Kindle, Echo smart speaker, Echo Dots, and an array of tablets.

The report offers the first-ever glimpse behind the scenes of how Bezos has become the world’s wealthiest man on the backs of low-paid workers.

China Labor Watch revealed how dispatch workers made up more than 40 percent of the Hengyang Foxconn’s workforce, a significant rights violation of the legally mandated 10 percent ceiling. Chinese dispatch workers, kind of like America’s temporary workers, are given remarkably different working conditions between regular workers.

When the American consumer slows its credit card purchases of Amazon products, the Hengyang Foxconn factory generally transitions into its “off season,” which many dispatch workers are temporarily laid off without pay, no social insurance, nor any contributions made to their housing provident fund. According to the Interim Provisions on Labor Dispatch, dispatch workers are to be registered for social insurance and employers are to make social insurance contributions — as mentioned above, that is indeed not the case at Hengyang Foxconn.

No rules, No Problem — Amazon makes billions of dollars by not paying its fair share of wages.

The report explains how regular workers receive extra sums of money for overtime hours and their wages are well above the standard of living; however, dispatch workers earn 14.5 RMB/hour (USD 2.26) with no extra pay for overtime.

If a dispatch worker misses more than two days or is late more than twice a month — their wages are cut to 13.5 RMB/hour (USD 2.11) for the rest of the month.

While there are clear distinctions in working conditions between regular workers and dispatch workers at the factory, all workers are subject to long hours and low wages. Workers put in over 100 overtime hours during peak season, and there was an instance of workers working consecutively for 14 days.

The average wage in Hengyang is 4,491 RMB (USD 700.88), however, workers at the factory on average earned wages between 2000 – 3000 RMB (USD 312.12 – USD 468.19) during the off-season. As wages are low, workers must rely on overtime hours to earn enough to maintain a decent standard of living. In spite of that, the factory cuts the overtime hours of workers as a form of punishment for those who take leave or have unexcused absences,” said China Labor Watch.

It is now starting to make sense how Amazon secretly profits at the expense of the poor working class folk.

China Labor Watch provides a summary of the rights violations at Hengyang Foxconn, which allows Bezos to make billions of dollars at the expense of exploiting low wages.

Immediately after China Labor Watch published the report on the “unethical and illegal” working conditions at Amazon’s supplier factory in Hengyang, the U.S. giant went into full damage control mode — issuing a statement regretting the “issues of concern.”

In its statement, Amazon said: “Amazon takes reported violations of our supplier code of conduct extremely seriously. In the case of the Foxconn Hengyang factory, Amazon completed its most recent audit in March 2018 and identified two issues of concern.”

“We immediately requested a corrective action plan from Foxconn Hengyang detailing their plan to remediate the issues identified and we are conducting regular assessments to monitor for implementation and compliance with our supplier code of conduct. We are committed to ensuring these issues are resolved.”

Kara Hartnett Hurst, Amazon’s head of worldwide sustainability, responded to The Guardian and said, “Amazon recognizes our responsibility to ensure the well-being of factory workers manufacturing products for Amazon.”

“This violates Chinese labour law. Foxconn uses a large number of dispatch workers and violates workers’ interests via these dispatch companies. This practice, in and of itself, is unethical and illegal,” he wrote. “I hope that you can compel your suppliers to improve their working situations and to manufacture Amazon products under ethical conditions,” Li wrote.

Li accused Bezos of enriching himself on the backs of the poor. “The factory employs dispatch workers as a means to cut manufacturing costs,” he said. “Amazon is only concerned about whether or not its supplier factories are completing orders in time and is generally apathetic towards the working conditions.” The result: a tragic mess where Chinese workers cannot make an honest living — where have we seen this before?…Oh yes, the American gig-economy.

“The wages at Hengyang Foxconn are not enough to sustain a livelihood and workers must put in overtime hours so that they earn a sufficient amount to have a decent standard of living. The factory even cuts the overtime hours of workers as a form of punishment,” Li concluded.

While Amazon has pitched to the millennials that it cares about humanity in the modern economy, China Labor Watch exposes the giant tech company as an oppressor – denying its supplier the ability to pay their employees a living wage in a modern sweatshop – so that a few elitist Americans can buy smart speakers they cannot afford. This is not sustainable…