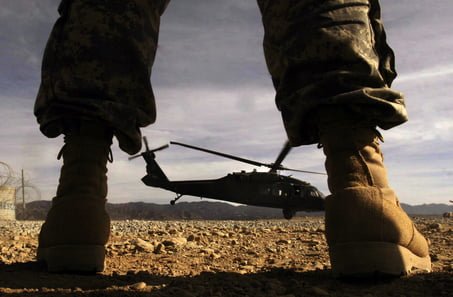 The catalyst for the next great war will likely occur somewhere in the middle east. The Americans know this. As do the Russians and the Chinese. And as with the last two ‘great wars,’ the groundwork is being laid well ahead of time.

A large American military force disembarked Tuesday, June 4, at the southern Jordanian port of Aqaba – ready for deployment on the kingdom’s Syrian border, DEBKAfile’s exclusive military sources report. The force made its way north along the Aqaba-Jerash-Ajilon mountain road bisecting Jordan from south to north, under heavy Jordanian military escort.

Our sources disclose that this American force numbers 1,000 troops, the largest to land in Jordan since the Syrian civil war erupted in March 2012. They are members of the 24th Marine Expeditionary Force carried aboard the USS Kearsageamphibious assault ship, which has been anchored off neighboring Israeli Eilat since mid-May. Upon landing, the marines took to the road in a convoy of armored vehicles including Hummers.

Washington and Amman have imposed a blackout on their arrival.

According to our US sources, the arrival of the US force in Jordan was not directly related to the regular exercise but decided on at an emergency meeting at the Pentagon on May 31, which was attended by top military and civilian Defense Department officials. Defense Secretary Chuck Hagel, who is away from Washington, took part by video conference.

Just last month the Russians, in response to a multi-year American Naval buildup, deployed the majority of their Pacific Fleet to the Mediterranean, and they are now shifting nuclear submarines to the region.

Sides are being taken, with Russia providing material support to the Assad regime and the United States providing money and weapons to the Free Syrian Army rebels, who sources claim are not only not Syrian, but likely operatives of America’s sworn enemy Al Queda.

There will be no draw down of troops or naval assets in the near future. Russia and the United States, as well as China, have strategic reasons for being in the region, and no one is going to pull back.

A terrible future lies ahead for the people of Syria and the greater world as this conflict continues to escalate.

Brandon Smith of Alt-Market.com puts forth an in depth analysis of the situation:

Using Vietnam and other proxy wars as a reference, here is how I believe the war in Syria is likely to progress over the coming months:

Now, the temptation here is for one to immediately take sides and to look at this conflict through the lens of “East vs. West.” This would be a mistake. The Syrian government has in the past acted in tyrannical fashion (though much of the latest accusations appear to be propaganda designed to lure the American public into rallying around another war).

Russia is just as restrictive an oligarchy as the U.S. or the EU. China’s society is a communist nightmare state and the average globalist’s aspiration for what they want America to become one day. Iran has many oppressive policies and is certainly not the kind of country I would ever want to live in. The Syrian insurgency is a mixture of immoral and unprincipled death squads and paid covert wet-work agents. The U.S. government is immorally supplying the cash and weapons for them to operate in the name of fighting the same kind of tyranny that is being instituting here at home.

The point is, there are no “good guys” in this story. There are no heroes; only the insiders, the outsiders, and the general public.

Full analysis at Alt Market: The Terrible Future of the Syrian War

Very few, if any, major conflicts throughout history erupted overnight.

These people – our dear leaders in America, Russia, China, Syria and Iran among others – are actively pursuing a strategy that is going to get hundreds of millions of people killed.

They are going to take the world to war… again.

Get ready for it, because we are going to see it in our lifetimes.