Peak Stock Market Absurdity: “We Are In A Bubble Of Epic Proportions” 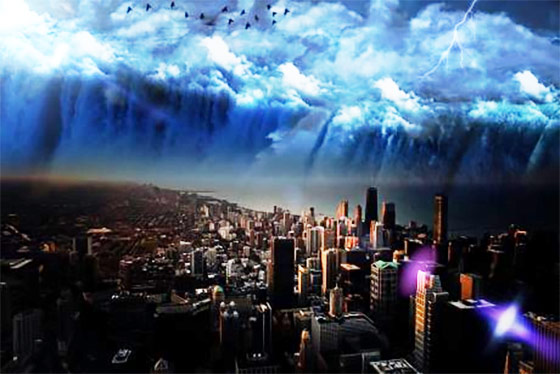 The following article was originally published by Michael Snyder at The Economic Collapse.

Have you ever wondered how tech companies that have been losing hundreds of millions of dollars year after year can somehow be worth billions of dollars according to the stock market?  Because I run a website called “The Economic Collapse“, there are naysayers out there that take glee in mocking me by pointing out how well the stock market has been doing.  This week, the Dow is flirting with 21,000 and the Nasdaq crossed the 6,000 threshold for the first time ever.  But a lot of the “soaring stocks” that have been fueling this rally have been losing giant mountains of money every single year, and just like the first tech bubble this madness will eventually come to an end in a spectacular fiery crash in which investors will lose trillions of dollars.

Anyone that cannot see that we are in the midst of an absolutely insane stock market bubble simply does not understand economics.  Every valuation indicator that you can possibly point to says that we are in a bubble of epic proportions, and history teaches us that all bubbles inevitably come to an end at some point.

Earlier today, I came across an article by Graham Summers in which he persuasively argued that the price to sales ratio indicates that stock prices are far more inflated than they were just prior to the great stock market crash of 2008…

Sales cannot be gimmicked. Either money comes in the door, or it doesn’t. And if a company is caught messing around with its sales numbers, someone is going to jail.

For this reason, Price to Sales is perhaps the single most objective and clear means of measuring stock valuations.

This metric, above all others, you can point to and say, “this is definitively accurate and has not been messed with.”

On that note, as Bill King recently noted, today the S&P 500 is sporting a P/S ratio that is massively higher than it was in 2007 and is only marginally lower than it was during the Tech Bubble (the single largest stock bubble of all time for most measures). 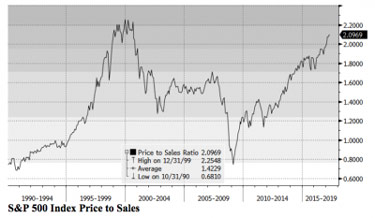 To me, looking at profitability is even more important than looking at sales.

Large tech companies such as Twitter certainly have lots of revenue coming in, but many of them are deeply unprofitable.

In fact, Twitter has never made a yearly profit, and over the past decade it has actually lost more than 2 billion dollars.

But despite all of that, investors absolutely love Twitter stock.  As I write this article, Twitter has a market cap of 11.5 billion dollars.

How in the world is that possible?

How can a company that has never made a single penny be worth more than 11 billion dollars?

Twitter is never going to be more popular than it is now.  If it can’t make a profit at the peak of its popularity, when will it ever happen?

And guess what?  ABC News says that Twitter actually just reported a decline in revenue for the most recent quarter…

Twitter has never turned a profit, and for the first time since going public in 2013, it reported a decline in revenue from the previous year. Its revenue was $548.3 million, down 8 percent.

The only reason why financial black holes such as Twitter can continue to exist is because investors have been willing to pour endless amounts of money into them, but now that bubble is starting to burst.

In his most recent article, Simon Black discussed how Silicon Valley investors are starting to become more cautious because so many of these “unicorns” are now going bust.  One of the examples that he cited in his article was a company called Clinkle…

(Given that investing in an early stage company is high-risk, investors might provide a few hundred thousand dollars in funding, at most. Clinkle raised $25 million.)

The company went on to burn through just about every penny of its investors’ capital.

There were even photos that surfaced of the 21-year old CEO literally setting bricks of cash on fire.

At the end of the farce, Clinkle never actually managed to build its supposedly ‘world-changing’ product, and the website is now all but defunct.

Most of you may have never even heard of Clinkle, but I bet that you have definitely heard of Netflix.

Netflix has revolutionized how movies are delivered to our homes, and that revolution helped drive movie rental stores to the brink of extinction.

There is just one huge problem.  It turns out that Netflix is losing hundreds of millions of dollars…

The company’s most recent earnings report for the period ending March 31, 2017 shows, yet again, negative Free Cash Flow of MINUS $422 million.

But even though Netflix is losing money at a pace that is exceedingly difficult to imagine, investors absolutely love the company.

I just checked, and at this moment Netflix has a market cap of 68.4 billion dollars.

Sometimes I just want to scream because of the absurdity of it all.

Nobody can possibly argue that these enormously inflated stock prices are sustainable.  Just like with every other stock market bubble in our history, this one is going to burst too, and I have been warning about this for quite a long time.

Perhaps they can all put their money where their mouth is by pouring all of their savings into Twitter, Netflix and other tech company stocks.

In the end, we will see who was right and who was wrong.

This article was written by Michael Snyder and originally published at the Economic Collapse Blog.