Panic Buying Grips the East Coast: Mad Rush for Supplies Ahead of Mega-Storm

While many people are still trying to make up their minds about the potential severity of the storm threatening the U.S. northeast, it’s not stopping millions of concerned residents from racing to to grocery stores, gas stations and hardware depots in droves.

If you’ve ever wanted to know what it looks like when the 99% of Americans who have failed to prepare for a disaster wake up and realize they are facing a major crisis take a look at what’s happening on the east coast ahead of Hurricane Sandy.

Good luck buying lanterns, generators, propane, or – if you are really unprepared – rain boots and batteries in areas in the path of Hurricane Sandy as it bears down on the U.S. East Coast.

The approach of the gigantic storm, which is expected to come ashore on Monday night set off a weekend scramble for supplies from Virginia to New England, causing long lines at gas stations, bare shelves at hardware and home-supply shops, and a run on bread, bottled water and canned foods.

“It’s been crazy. We’re the only one open who still has gas,” said Karen Tripodi, a customer service representative at Cumberland Farms, a gas station and market in Newington, Connecticut.

“They’re coming in for propane, ice, water, milk and cigarettes.”

In Hartford Connecticut on Saturday, from the shoreline to well inland, residents and business owners scrambled to get ready for Sandy.

Preparations for the storm took place all over the state, as banks, pharmacies, home improvement centers, electronics stores, pet shops and supermarkets opened Saturday to lines of customers stocking up.

Early birds got D batteries, flashlights, propane refills, bottled water and other sought-after storm supplies. Those arriving later had to deal with bigger crowds, dwindling supplies and, in some cases, empty shelves.

Meteorologists are warning residents across over 600 miles of coastline from Wilmington, Delaware to Bangor, Maine that they need to brace for widespread power outages, sustained high winds, Appalachian snows, deadly storm surges for low lying, massive beach erosion, and flooding in what is being referred to by the NOAA as an “historic storm.” 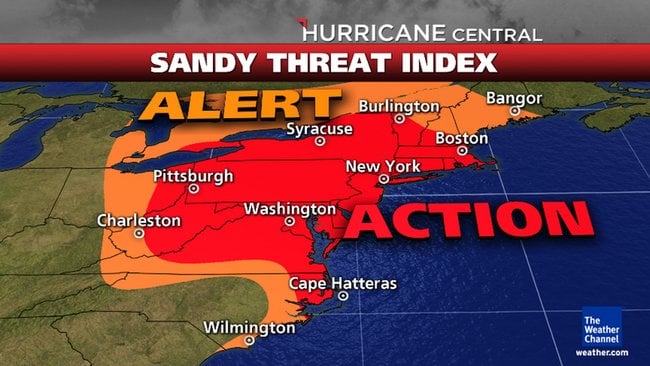 Millions of Americans within the path of the storm, who waited too long to take it seriously, are now scrambling to acquire the most basic necessities ahead of Sandy’s expected landfall sometime early Tuesday morning:

Folks across Central Virginia, the Northern Neck and much of the East Coast started stocking up at the grocery store as forecasters warned of the looming “Frankenstorm.”

“It is a little surprising. I didn’t think it would come that close to the coast,” Connie Davidson told CBS 6 News’ Sandra Jones.

Davidson was getting a jump on Hurricane Sandy and stocking up on basics, including water and batteries.

She’s was just one of numerous customers Friday at Pleasants Hardware.

“I got an oil lamp, got a portable castle iron. I got a portable heater,” Carl Shiles said. “It’s going to be getting cool next week — and if we lose power, I have a 92-year-old mother-in-law.”

“During the storm, we figure we’ll have gas. So, we’re going to get a lot of things that we can to just pop in the oven and be done with it,” he said. 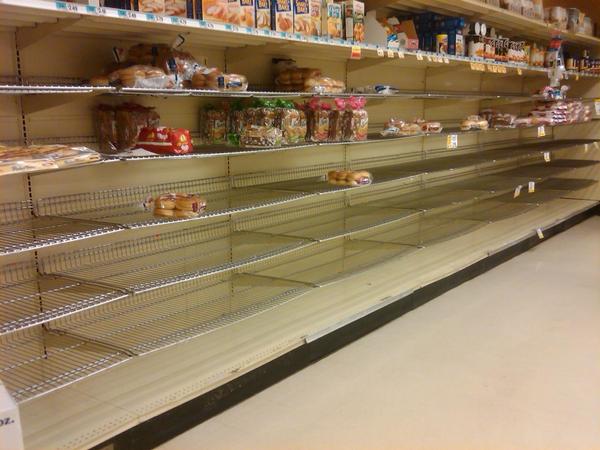 Preparations ranged from mandatory evacuations ordered by Gov. Christie for portions of the Jersey Shore to residents preparing for long power outages by cleaning shelves of water, batteries and bread. New Jersey’s utility companies also were preparing for a massive number of power outages.

People turned to social media to report bare shelves in grocery stores and the early effects of the storm in their communities, including strong winds and even flooding in some Shore towns.

Items such as flashlights, D batteries and bottled water have already run low in many locations, as have bread and nonperishable food items. Other items that may run low include tarps and pumps.

Grocery store lines in Bushwick, Brooklyn, and undoubtedly throughout the city were stretching through the aisles this evening. According to ABC News, one Trader Joe’s line just to enter the store wrapped around the block.

Throughout the area, grocery stores and gas stations were crowded Sunday as residents stocked up on necessities.

The lines at the pumps at Sunoco on Valley Forge Road at Whites Road were three or four cars deep late Sunday morning, and the cars trying to get in and out were causing jams in the parking lot and on Valley Forge.

Denise Bohne-Schmidt, a nine-year employee of the Sunoco, said the gas station ran out of regular gasoline Friday, Saturday and Sunday. When it runs out, a truck comes to the station to replenish the supply, but that sometimes takes hours.

She said she’s never seen the gas station so busy, not even before a snowstorm.

“People are complaining, screaming, yelling, they’re yelling at me and there have been fights between customers — it’s been a mess.”

At Weis Market on Valley Forge Road in Lansdale, manager Mike Ryan said that sales are up 29 percent since Friday, with most people buying cases of bottled water and bread. He had three extra deliveries, but the bread supply was almost depleted and bottled water was dwindling.

“People who have well water are nervous, because if the power goes out, they won’t have water,” he said.

Arlene Widman of Lansdale had several cases of bottled water in her cart for herself and her two adult daughters.

For those on the east coast, we wish you the best as the brunt of the storm passes over the next 72 hours. Many of our readers have likely prepared for the worst and have critical supplies like food, potable water, gas, batteries, off-grid cooking supplies and generators on hand.

For those still lacking supplies, we’d strongly recommend stocking up on as many snow hurricane preparedness items as you can within the next 12 hours if supplies are still available in your area.

With the potential for widespread power outages and flooding, there is a strong possibility that many areas may experience supply problems in coming days and weeks, especially if this storm damages critical utility infrastructure.