On April 1st 2019, the Bank of International Settlements designated gold as part of its Basel III regulatory framework, a tier-1 ASSET CLASS. Up until then, it was considered a tier-3 asset, which qualifies for 50% collateral, whereas tier-1 assets (same as USD cash and U.S. Treasury bonds) qualify for 100% COLLATERAL.

That announcement didn’t get much press. That caught my attention, since over the years, I’ve seen gold HYPED-UP because of many macroeconomic events, which turned out to be big piles of nothing. But I saw no hype with that one, so I knew THERE WAS something to it.

There have been plenty of instances where WE HEARD gold was going to $10,000/ounce, and that we should hold all of our net worth in gold. Examples are events, such as the following: the fiscal cliff, the double-dip recession scare, Brexit, Islamic Shariah Gold Standard, gold-backed contracts in China, trade war tariffs and the list goes ON AND ON. People find reasons literally ON THE DAILY, yet they fail to understand that Basel III, which got NO MENTION from the mainstream press, is the only IMPORTANT NEWS.

Since April 1st 2019 (the day the Bank of International Settlements made the announcement), the price of gold has gone in only ONE DIRECTION and that’s up. 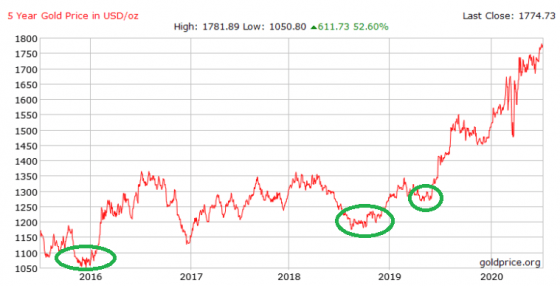 I own A SIGNIFICANT-SIZED position in physical gold and silver coins and you can see how the circle to the right, which is the most recent one, JUMP-STARTED a major move for gold. That circle represents the Basel III announcement, which was published when gold traded for $1,281 just sixteen months ago.

The middle circle represents a LARGE PURCHASE I made, when we pounded the table that QUANTITATIVE TIGHTENING was a bluff, even though the markets gave up on gold and it reached $1,180. The price I paid was around $1,200.

Just two years ago, from July to September 2018, investors were THROWING IN THE TOWEL on gold. Luckily, when it comes to physical coin purchases, our mindset is to BUY LOW and never sell (or sell only under incredible circumstances).

This past Friday, my wife and I went to one of the finest cocktail bars in our area. The place WAS EMPTY! It felt surreal, but the bartender assured us that in one hour, the place would fill up. An hour later, we were still the ONLY CUSTOMERS!

Bad times are coming. What’s hard to come to terms with is that CEOs have been delaying the hard decisions of firing employees permanently, but they can’t keep the charade going for long. These workers DID NOTHING WRONG, yet they’ll be punished for Covid-19’s economic impact.

There can be no “V”-shaped recovery for Main Street and for small businesses, since many things are LEFT UNANSWERED.

I want to show you what Bloomberg published just three weeks after the Basel III announcement, which MADE GOLD a really valuable asset to own: 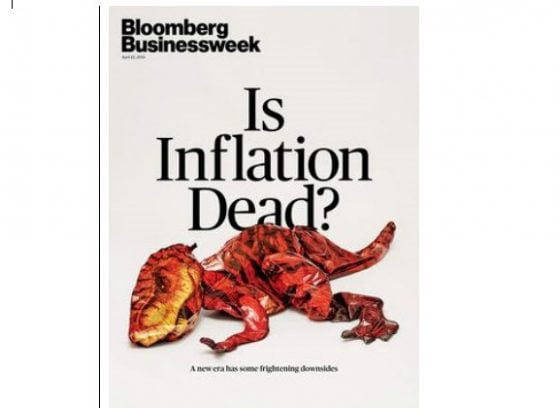 Inflation isn’t dead, but in my opinion, it will REMAIN LOW for years to come. The point that all gold bugs TRAGICALLY MISS is that investors don’t flock to gold when inflation occurs, but when it SURPRISES or REFLATES.

Put differently, if Chairman Powell were to say that he expects 2.5% inflation, no one would be stunned by it. That’s not what he’s saying, though. For his entire tenure as Chairman, he’s been saying inflation isn’t a problem. 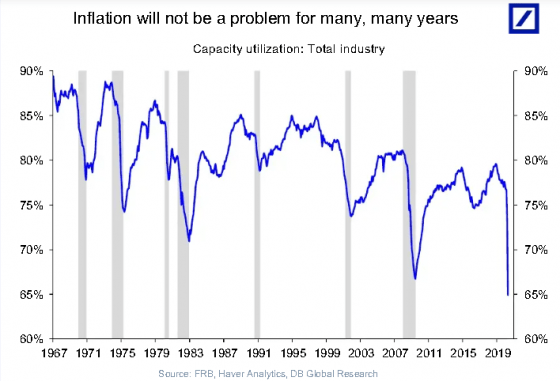 Notice that EVERY TIME capacity utilization rises, as the economy recovers from slumps, there’s a REFLATION and gold prices rise.

It’s the ideal time to own gold stocks!

They’ve gone up in price since April 2019, following the gold spot price move, and recently have begun to REALLY BREAK OUT.

This has nothing to do with politics or who wins the upcoming elections; it has EVERYTHING TO DO with the upcoming layoffs in tech companies, which will mark the end of their growth period (for the time being). Gold companies, BY COMPARISON, are rocketing with stellar results.