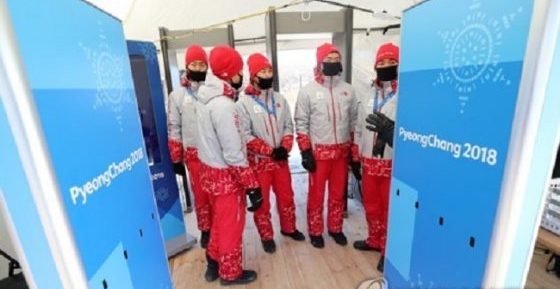 South Korea, the home of the 2018 Winter Olympics, has deployed 900 military personnel after 1,200 security guards contracted the highly contagious norovirus. Although the guards were pulled from their duties at the Winter Olympic facilities in Pyeongchang, the virus is still spreading.

“The military personnel … will be responsible for security checks of the 20 venues as they take up jobs such as security searches, previously done by civilian safety personnel until the patients’ condition is normalized,” a statement from the Pyeongchang Olympics committee said.

The norovirus is an infection which causes the sudden and severe onset of diarrhea and vomiting; symptoms which begin within 12-48 of exposure and can be painful. The virus is highly contagious and commonly spread through food or water that is contaminated during preparation or contaminated surfaces. You can also be infected through close contact with an infected person. Most people will cover without treatment in three days, however, hospitalization can occur if victims are infants or elderly.

Organizers said this viral infection is particularly bad. Of the 1,200 guards removed from duty, 41 had suffered a sudden onset of vomiting and diarrhea on Sunday and all had been taken to a hospital. The outbreak comes just days before the opening of South Korea’s 2018 Winter Olympics on Thursday.The Korean Center for Disease Control and Prevention (KCDC) said in a statement Monday that the 41 security guards had been staying at the same building in Pyeongchang. “KCDC dispatched an immediate response team to the Pyeongchang site to check additional people for symptoms, check the origin of the exposure, take measures to control infection, and prevent spread,” the statement said.

It’s still not clear how the security guards become infected with the virus in the first place. Water and food at the accommodations sites are currently being tested. Meanwhile, the Winter Olympics committee said it would strengthen checks on sleeping quarters for staff working at the games to prevent further infections.