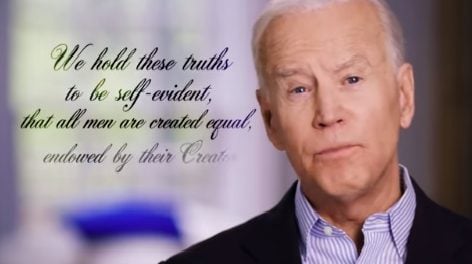 Following months of anticipatory leaks and the ‘gropegate’ scandal that nearly derailed the former VP’s ambitions, Joe Biden, who has consistently polled at the top of the ever-expanding Democratic field, has finally announced his plans to seek the 2020 nomination.

In a video published via his Twitter feed Thursday morning, the former vice president and Senator from Delaware declared his intention to run, declaring “the core values of this nation… our standing in the world… our very democracy…everything that has made America — America – is at stake.”

In the video, Biden framed his video with the infamous 2017 “Unite the Right” rally in Charlottesville, Va., – a “defining moment for our nation in the last few years” – where a counter-protester was killed after a member of a white supremacist group plowed into a crowd with his car. He contrasted the march with the writing of the ‘Declaration of Independence,’ which was penned by Thomas Jefferson in Charlottesville more than 240 years earlier.

In the video, Biden. condemned Trump for assigning a “moral equivalency” between the neo-Nazi marchers and the people protesting them when he said there were ‘fine people on both sides’.

“In that moment, I knew the threat to our nation was bigger than anything we’ve seen in our lifetime. I believe our nation will look back on this president…as an aberrant moment in our history. Our very democracy…is at stake.”

“America is an idea, an idea that is stronger than any army, bigger than any ocean, more powerful than any dictator on Earth…it instills in every person in this country the belief that in this country there’s nothing you can’t achieve if you work at it. We can’t forget what happened in Charlottesville, even more important we have to remember who we are.”

Before signing off, Biden warned that America can’t afford eight years of Donald Trump, saying it would ‘forever alter the character of the nation.’

“If we give Donald Trump eight years in the White House, he will forever and fundamentally alter the character of this nation, who we are. And I cannot stand by and watch that happen. The core values of this nation, our standing in the world, our very democracy, everything that’s made America America is at stake. That’s why today I’m announcing my candidacy for president of the United States.”

The core values of this nation… our standing in the world… our very democracy…everything that has made America — America –is at stake. That’s why today I’m announcing my candidacy for President of the United States. #Joe2020 https://t.co/jzaQbyTEz3

Biden will follow his announcement with a fundraiser on Thursday, then a rally Monday in Pittsburgh, Bloomberg reported, citing an announcement from his campaign. Over the next ten days, he plans to make stops in Iowa, New Hampshire, Nevada, and South Carolina, the earliest primary and caucus states.

Though Biden’s eight-year stint as Obama’s VP gives him an unrivaled name and brand recognition in a field of 20 candidates, Obama has said he won’t make an endorsement until a nominee has been chosen. Online betting odds still favor Biden, 76, as the front-runner for the nomination, though “Democratic Socialist” Bernie Sanders is a close second, followed by the ascendant South Bend, Ind. mayor Pete Buttigieg.

Of course, Biden’s well-documented history of inappropriate touching isn’t his only major liability going into the Democratic primary (the Iowa caucuses are just 10 months away). The appearance of a quid-pro-quo involving Biden, his son, taxpayer money and a ‘sweetheart’ deal in Ukraine could very well become the scandal that finally proves his undoing.