“One Of The Most Vile, Misleading Headlines Of Our Time”: NY Daily News Runs FAKE NEWS Headline Claiming Florida Shooter Was “Trained” By The NRA 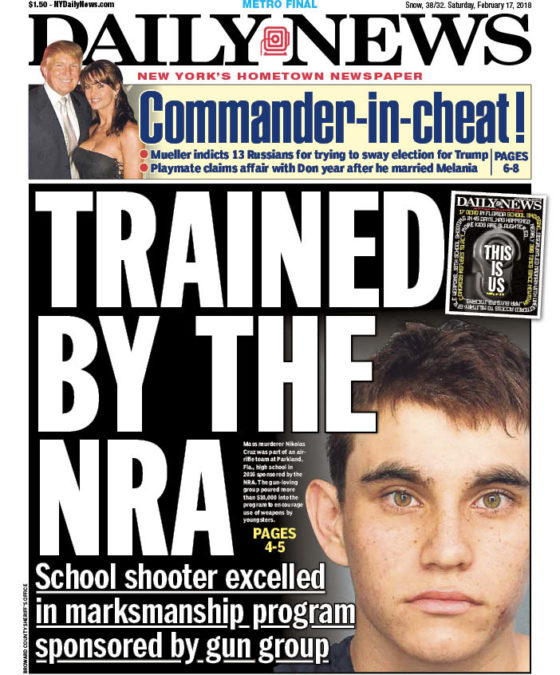 In what has been described as one of the most vile, misleading headlines of all time, the left leaning New York Daily News published their Saturday edition with a cover that includes the ridiculous fake news claim that alleged Florida school shooter Nikolas Cruz was actually “trained” by the NRA themselves.

Apparently aiming to give Democrats an assist with their renewed push to disarm the American people, The NY Daily News latched onto the fact that the JROTC program at the school received funding from the NRA as evidence that the shooter himself received training from them.

The problem? The claim is about as misleading as they come, especially when you consider that while it is true that Cruz was at one time a member of the JROTC, so where dozens of other students, some who even HELPED others get out of the school during the shooting itself!

All the NRA did was give a grant to the JROTC program. They did not “train” Cruz and, sadly, the leftist propagandists at the NY Daily News are well aware of this fact but are hoping their readers are so uninformed that they believe this actual fake news.

The story itself was specifically designed as a hit piece against an organization that liberals throughout the country have painted as an all powerful, well-funded group when, in reality, anti-gun groups have spent literally hundreds of millions of more dollars than ANY pro-gun group ever has.

Users on Twitter were quick to destroy the fake news cover, making it clear that at least some Americans are able to see through this transparent leftist propaganda.

One of the most vile, misleading headlines of our time. The term “Hack” is way too good for you

Rare is the week that journalism does a good job to bolster its credibility, but goddamn this week has been such an abysmal display of dishonesty and incompetence. https://t.co/7COMSFCmHp

It’s the NRA’s fault he joined the ROTC.

So was one of the children who died defending his classmates, you scum sucking smear merchants. https://t.co/D8neIquGBL

You CAN write headlines like this that mislead your readers, but HOW do you live with yourselves?

You are not news, you are propaganda.

He was in JROTC before his expulsion, the funds were for JROTC.

He joined a JROTC program in school which is for kids who want to join the military later on in life. You didn’t mention that other kids in this program helped protect some of their classmates. By this logic US taxpayers also trained him cause this is a public school program

The air rifle team was part of the school’s Junior ROTC program but I suppose click bait is what it’s all about. I guess “trained by Junior ROTC” doesn’t have that certain frisson. (And not to put too fine a point on it, Junior ROTC kids at that school protected fellow students.) https://t.co/MU3BspbLO8

So was one of the children who died defending his classmates, you scum sucking smear merchants. https://t.co/D8neIquGBL

The club was an air rifle team and was hosted by the ROTC. Amazing smear here considering JROTC students helped other students out of the school. This is really amazing. https://t.co/9XesQ7izWy

The NRA gave a grant for the JROTC program. This isn’t even reporting. It’s clickbait garbage. This isn’t journalism. It’s why no one trusts the media. @C_Sommerfeldt @Janon_Fisher

Good God, I didn’t even realize this was the Daily New’s front page today. Sometimes media cynicism can be so breathtaking that it becomes affirmative malice. pic.twitter.com/GECBwW7eXX

Can the media sink any lower? https://t.co/beTyBB3nt2

Make no mistake. ALL those involved with this disgusting hit piece, including the reporters who wrote it, the editors who allowed it, and the punk who wrote the fake news headline are nothing more than leftist propagandists masquerading as journalists.