Oil Hurricanes May Cause Toxic Rain and Food Security Issues What do you get when you mix a hurricane with an oil spill? How about the potential for a stronger hurricane, higher hurricane winds, toxic rain, and oil infused storm surges. Or, for those of you who prefer a little doom in your forecast, perhaps you’d like to hear that the Russian Ministry of Natural Resources believes “that the BP gas leak is going to become ‘the worst environmental catastrophe in all of human history threatening the entire eastern half of the North American continent with ‘total destruction’.”

2010 Hurricane Season Will Be Very Active 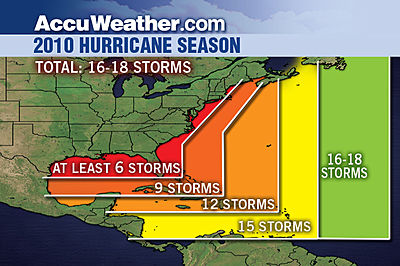 Since hurricane season began on June 1st, hopefully many have prepared for and are bracing themselves for what may be an extremely active season. That being said, what kind of response or contingency plan would the government have if a hurricane threatened to send oil or chemical dispersal agents ashore? Is there an emergency protocol for an emergency such as this? Can a hurricane be more devastating with the oil sitting on top of the water surface? One hurricane expert believes it can:

Kerry Emanuel, a hurricane expert at the Massachusetts Institute of Technology says that hotter water helps create more powerful hurricanes… Theoretically, the Gulf [water] underneath this oil slick should be getting hotter than it normally would be… You have this black surface, and it’s doing two things, Emmanuel says. “First of all it’s absorbing sunlight. And secondly, it is curtailing evaporation from the Gulf.”

It’s Not What the Oil Would Do to a Hurricane, But What the Hurricane Would Do With the Oil

With the likelihood of there being multiple strong hurricanes this season, coupled with an oil spill that will not be cleaned up until the government stops dragging their feet (through the oil soaked waters), the impact of oil and dispersal agents coming ashore is a deadly combination. That brings us back to what the Russian Ministry of Natural Resources said about the oil spill threatening the eastern half of the North American Continent with ‘total devastation’.”

According to the The European Union Times, “Russian scientists are basing their apocalyptic destruction assessment due to BP’s use of millions of gallons of the chemical dispersal agent known as Corexit 9500 which is being pumped directly into the leak of this wellhead over a mile under the Gulf of Mexico water and designed, this report says, to keep hidden from the American public the full and tragic, extent of this leak that is now estimated to be over 2.9 million gallons a day.”

So what is Corexit 9500 that is being used to “pull the wool over our eyes”?

Corexit 9500 and Corexit EC9527A are chemical solvents that break up the oil into minuscule particles. The active ingredient in both Corexit 9500 and Corexit EC9527A is 60% 2-Butoxy-ethonal, a neuro toxin pesticide that can be absorbed through the skin and cause damage to both human and aquatic life, causes cancer, as well as damage to internal organs, has a history of damaging reproductive organs, as well as genetic mutations. Both of these chemicals are more toxic than oil, and can cause long term damage. The effectiveness of the chemical dispersants is mediocre at best. The effectiveness of Corexit 9500 is 54% and the effectiveness of Corexit EC9527A is 63%. Not only is the effectiveness an issue, but these dispersants do not eliminate the oil, nor do they decrease the oil’s toxicity. The worse part of this is, when mixed with the warm waters of the Gulf of Mexico, its molecules will transition from a liquid state into a gaseous state, which can be absored by clouds. Thus causing toxic rain.

Toxic Rain Could Destroy Our Way of Life (TEOTWAWKI)

According to the European Union Times, the effects of toxic rain would theoretically destroy microbial life and potentially set off the death of our food chain as we know it. If this happens, the entire food chain would be effected by this — from beetles to birds to deer. In laymans terms, our way of life could be gravely threatened.

Of course, this scenario depends entirely upon the timing of the hurricane and the direction it is headed. According to hurricane experts, if a hurricane passes to the east, the oil would be driven away from the coast. If the hurricane passes to the west of the oil slick it would bring oil ashore. And storm surges would further bring oil and chemical ladened water onto land, thus corrupting, and contaminating anything it touches. It would pollute vegetative marshes, as well as areas prone to wildlife, not to mention our food and water sources.

Due to the lack of information on this crisis, it is all speculation at this point. But what we do know is that if a person comes in contact with the fumes or dispersants from the crude, it can make them very sick and effect their respiratory system. Additionally, if a person gets crude on their skin, prompt measures need to be taken to thoroughly clean the oil off. Here is some information provided by the CDC on the effects of crude on the body and what symptoms to look out for.

The Gravity of the Situation

The reality of the situation is just as the temperature continues to increase, so does the potential threat of a hurricane or tropical storm. Those that live on the Gulf coastline should prepare earnestly for this year’s hurricane season and take preparing seriously. This situation is too big to gamble your life on. The coastlines are already vulnerable due to the crude damaging the vegetation off the coastal marshes (coastal marshes minimize the storm surges strength when it hits the coastline). Unfortunately, the government (in all of it’s infinite wisdom) is dragging their feet on yet situation another major disaster. But isn’t the lapsed response and mismanagement to major emergencies the reason most of us are prepping and becoming more self reliant? This is a potential TEOTWAWKI situation and preppers in this surrounding area should be made aware of the severity of the situation and prepare accordingly. Those that are in the area should prepare for madatory evacuations, toxic rain, stocking up on more storage food, water and medical supplies. Most importantly have a bug out location and a plan in place! Brace yourselves folks, it could get rough.

Hurricanes and The Oil Spill