If we’re not living in a militarized police state, then please explain what Ohio State University could possibly need with one of these. 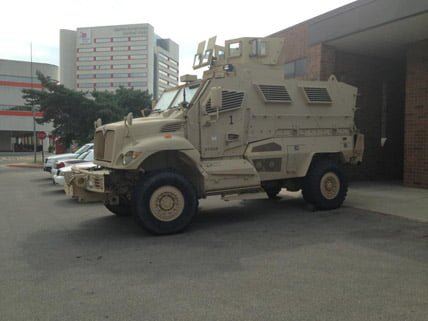 The Ohio State University Department of Public Safety has acquired an armored military vehicle that looks like it belongs in Iraq or Afghanistan.

Gary Lewis, a senior director of media relations at OSU, told The Daily Caller via email that the “unique, special-purpose vehicle is a replacement” for the “police fleet.” He called the armored jalopy “an all-hazard, all-purpose, public safety-response vehicle” with “obviously enhanced capabilities.”

He noted that the vehicle was “acquired at no cost from Military Surplus.” He also bragged that it has “extremely low miles and is in nearly new condition” but elaborated no further concerning the acquisition.

“We are in the process of making it usable for our needs in an urban campus environment,” Lewis explained. “Specifically we are removing the top turret and repainting.”

The vehicle looks like an MRAP, which is the general name for an armored fighting vehicle designed to survive ambushes and improvised explosive device (IED) attacks. Lewis mentioned nothing about IEDs or ambushes in his email to TheDC.

Instead, the school envisions a number of uses for the vehicle including “officer rescue,” “hostage scenarios,” “bomb evaluation” and active killers loose on campus.

The vehicle also boasts a “sniper perch” and it is ideal “for crew protection under threat of explosives and small arms fire.”

According to the military, the Mine-Resistant Ambush-Protected (MRAP) vehicle is specifically designed for asymmetric warfare.

So let’s get this straight.

University students and teachers are forbidden from bringing a licensed handgun onto school property for personal protection in case of a hostage situation or active killer being loose, but it makes complete sense, because of the terroristic threats we face, to put a military fighting vehicle on campus?

Perhaps it’s yet another desensitization effort in the grand control grid. Our kids should get used to heavily armed vehicles and police, as they will soon be seeing them throughout communities all over America.