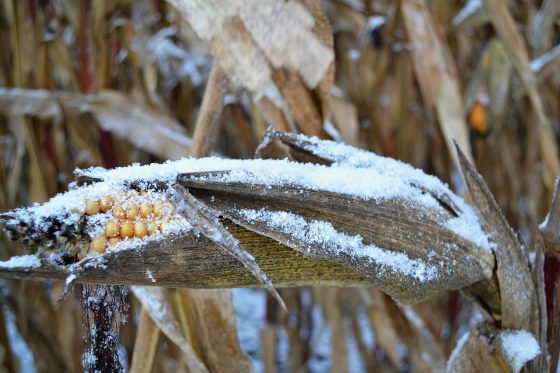 We are witnessing “unprecedented” crop failures all across the United States, but the big mainstream news networks are not talking too much about this yet.  As you will see below, local news outlets all over the nation are reporting the disasters that are taking place in their own local areas, but very few people are putting the pieces of the puzzle together on a national level.

The endless rain and horrific flooding during the early months of this year resulted in tremendous delays in getting crops planted in many areas, and now snow and bitterly cold temperatures are turning harvest season into a complete and utter nightmare all over the country.  I am going to share with you a whole bunch of examples below, but first I wanted to mention the snow and bitterly cold air that are rolling through the middle of the nation right now…

A wintry weather pattern that brought single-digit temperatures and more than a foot of snow to parts of the Upper Midwest rolled across a wide swath of the nation Monday, threatening to break hundreds of records and bring a deep freeze as far south as Florida.

“The coldest surge of arctic air so far this season will bring widespread record low temperatures for much of the central and eastern U.S. even down to the Gulf Coast,” said Kwan-Yin Kong, a meteorologist with the National Weather Service’s Weather Prediction Center.

We are being told that “more than 300 daily records” are likely to be broken, and this will be the final nail in the coffin for this harvest season for countless numbers of farmers.

And even without this latest wave of bitterly cold weather, this was already going to be the worst year for U.S. agriculture that most people can remember.  The following are 12 examples of the crop disasters that we are witnessing right now…

#1 North Dakota: “Agriculture Secretary Sonny Perdue has approved North Dakota’s request for a Secretarial disaster designation for 47 counties related to late season rainfall and the October snowstorm. The declaration came on Friday, Nov. 8, the same day that Sen. John Hoeven, R-N.D., hosted Bill Northey, U.S. Department of Agriculture’s under secretary for farm production and conservation, to hear from producers at a roundtable and see the impacts of flooding and the early blizzard during a field tour in the Red River Valley.”

#1 Northwest Minnesota: “Minnesota Gov. Tim Walz asked the U.S. agriculture secretary on Thursday to declare a disaster for 12 counties of northwestern Minnesota where farmers are struggling through a very difficult harvest season. The governor said in a letter to Secretary Sonny Perdue that unrelenting bad weather has come on top of challenges farmers were already facing from low commodity prices and trade uncertainties. He told Purdue how the region’s crops have fallen victim to flooding, disease and freezing temperatures, leaving many producers unable to harvest them.”

#1 Iowa: “Last week, according to the Iowa weekly growing season report for the week ending Nov. 3, Iowa’s average temperature was 33 degrees, 12.6 degrees below normal, and with the southerly dip in the jet stream came multiple fast-moving winter-type systems through Iowa during the week, bringing a statewide average of 2.4 inches of snow. Mason City farmer Kevin Pope said with the early snow, all harvest has been halted.”

#1 Ohio: Three local counties are among the 14 in Ohio that the United States Department of Agriculture said are primary natural disaster areas. Champaign, Clark and Miami counties were added to a growing list of designated primary natural disaster areas, which means farmers in those counties can apply for disaster loans. Farmers are eligible only if they suffered a 30% loss in crop production or a physical loss of livestock, livestock products and real estate.

#1 The Red River Valley: “Near Grand Forks, Minnesota, successive nights of subfreezing temperatures from late October into early November caused an estimated $45 million in damage to around 9,000 acres of red and yellow potato crops in the Red River Valley. Wet conditions in October delayed the potato harvest that usually occurs around Oct. 1. This left about half of the red and yellow crops, which are grown for the fresh market, vulnerable to frost damage. This is what Ted Kreis, spokesman for the Northern Plains Potato Growers Association, told Fresh Plaza on Nov. 4.”

#1 Illinois: “Pritzker filed an appeal of the agency’s denial last week, saying the federal government is withholding assistance from 1.4 million Illinois residents affected by the flooding, which the Illinois Emergency Management Agency determined was the state’s worst in more than 25 years. The conditions caused delays for farmers planting spring crops, including corn and soybean, and prompted the U.S. Department of Agriculture to declare an agriculture disaster in the state in August.”

#1 Colorado: “There is no doubt that extreme weather has greatly impacted agricultural producers over the last several years, and 2019 is no exception,” said Clarice Navarro, executive director for Farm Service Agency in Colorado. “With record amounts of crops prevented from planting nationwide and other devastation, more than $3 billion is available through this disaster relief package passed by Congress and signed by President Trump in early June.”

#1 Kentucky: “The federal government has approved Kentucky’s request for a disaster declaration for counties in which farmers’ crops were negatively affected by this summer’s drought.  In an Oct. 16 letter to Brian Lacefield, the state executive director of the U.S. Department of Agriculture’s Farm Service Agency, Kentucky Agriculture Commissioner Ryan Quarles asks that the federal agency consider a disaster declaration for Kentucky counties that “have suffered losses due to the extreme heat and drought.”

#1 Birch Hills County: “Birch Hills County has joined the County of Grande Prairie and Saddle Hills County in declaring an agriculture disaster. In a release, they say some farmers still have up to 50 percent of this year’s crop that is unharvested, while Hay crops in Birch Hills were harvested late, with some not able to be taken off the ground at all.”

#1 Idaho: There was sadness and dismay in eastern Idaho’s potato community this weekend as the 2019 harvest wound down and growers began tallying up their losses from October’s disastrous freeze while pondering what to do with the tons of unusable tubers it left behind. This season’s harvest will be marked by tons of decaying potatoes for which there is no home.

I could have easily doubled the size of that list.  People all over the country are writing to me and telling me how bad things are in their areas, and ultimately all Americans will feel the pain of this crisis because all of us will soon be paying significantly higher prices for food at the grocery store.

And we don’t even know the full extent of this crisis yet, because the bitterly cold air currently ripping through the middle of the nation is going to cause even more crop failures…

The blast of record-breaking Arctic air that’s charging across the country will bring the growing season to a screeching halt in much of the southern and eastern U.S. this week.

Freeze watches have been posted as far south as the Panhandle of Florida, where Pensacola should see a low temperature of 31 degrees by early Wednesday morning. “Conditions can kill crops, new growth and sensitive vegetation,” the National Weather Service in Mobile, Alabama, warned.

A lot of people out there are still not taking this seriously.

Look, despite all of our advanced technology we still have to grow the food that we eat, and we can only grow food if the weather cooperates.

And as I discussed yesterday, experts are telling us that we should expect a very bitterly cold winter ahead of us.

This is a crisis that isn’t going away, and it is likely to continue to get worse in the months ahead.