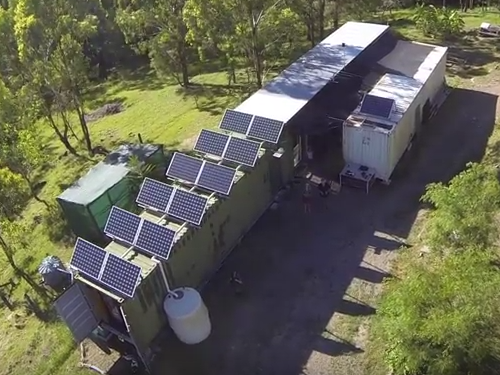 Whether you’re looking to return to paradise or escape the collapse of society, more and more people are looking to get away from it all and rediscover their inner-rugged individual self.

The off-grid, self-sustaining bug out lifestyle has a growing appeal and is an important part of most prepper’s strategy… in some ways it is the ultimate security investment, especially if it is set up for power, water and raising your own food.

Living unconventionally calls for unconventional solutions. It is geared towards the DIY prepper, and often involves making good use of re-purposed items. The suburban home mortgage is neither secure, nor affordable, nor resilient in a crisis.

But the modified shipping container, or tiny home or cabin structure, along with many other options, offers many aspects that are. They can be built debt free, and depending upon your environment, can be made to withstand the elements – and perhaps more importantly, maintain lights, water and shelter regardless of whether or not bills are paid, or the grid remains up and running.

Planning for the rest is up to you.

Check out this custom-built off-grid home – double trailer design that has afforded freedom for this bold couple in Australia:

Here’s what Kirsten Dirksen wrote about it on her great off-grid YT channel:

Paul Chambers had began building a home out of two shipping containers as a project, but when his wife got tired of suburbia and put their four-bedroom home on the market, his project became the couple’s full-time home (Paul’s ebook: www.buildshippingcontainerhous­e.com)

Paul and Sarah Chambers were living in rural Scotland when Paul received a job offer in Australia. They packed their belongings and moved to a large home with a pool in an Australian suburb. After only a few months, they began to tire of spending so much of their income on their home. They also felt they’d lost touch with nature and a more active lifestyle (“there weren’t even any trails for walking”, explains Sarah).

So they sold their home and moved with Paul’s “project”: two shipping containers he’d been transforming into a kitchen/bathroom + bedroom/living room. They found someone willing to let them park their new home on their rural property in exchange for making improvements to the land.

When the couple first moved onto the property, the home was a very simple shelter and over the following three years, they built the containers into a proper home.

Their home is completely off the electric and water grids. When they first moved to the bush they used a 3kw Honda generator, but they’ve since installed 2Kw of photovoltaic panels and a bank of batteries and phased out the generator. They have enough energy to power their home with all its conventional appliances, including a standard fridge/freezer. For heating, they rely on firewood (collected from fallen trees on the property; they have “not cut down a single tree”). For air conditioning, they use fans and AC “during really hot days”.

In the beginning they had to rely on water deliveries, but Paul has since installed an extensive rainwater capture setup- both on the roof and gutters beneath the home- which provides for all their water needs: 65 square metres of rain water collection in 10,000 liters of storage. The indoor bathroom includes a shower, but Paul built an outdoor, open air bathtub which they heat with solar in the summertime.

They’ve also created an extensive vegetable garden inside a netted garden cage (after the animals and hot sun destroyed their first attempts). For eggs, they have two hen houses.

To be sure, this lifestyle isn’t for everyone, but the important thing is that it is possible.

Paul Chambers has written a book on how he built the home, and what it cost. He also explains the aspects of his project home in greater detail on his YouTube channel.

Think Inside The Box: This Awesome Disaster Shelter Is Cost-Effective, Easy To Build and Insanely Durable

Going Off Grid? “Here’s what to do about water…”

In the 50s, Preppers Retreating to Off-Grid Shelters After Attack Were “Treasonous”