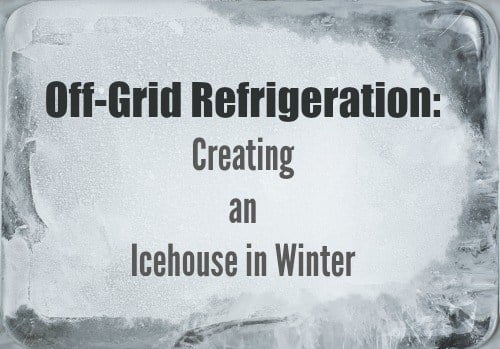 This article was originally published by Jeremiah Johnson at Tess Pennington’s Ready Nutrition on February 21, 2017.

For those without enough property or in an urban or suburban area, an icebox might be a good thing to have, at least as a backup for the refrigerator.

Those who plan to create ways for off-grid refrigeration usually plan to build when the snow thaws, but I’m doing something a little different – I’m planning on building one now.  The main problem for me right now is that I have four feet of snow on the ground, and it’s a little hard to do a layout or any kind of excavating for it.  But what of it?  That doesn’t mean I can’t plan now, nor undertake it before the winter months disappear.

Icehouses were used extensively in the U.S., especially in “pioneer days,” where they would be the main way of keeping meats and vegetables cool and “refrigerated” in a manner to not require canning, smoking, or drying them.  These icehouses were combined with root cellars/canning cellars to be structures heavily-insulated with earth to keep everything cool and from spoiling in the spring and summer months.  I also mentioned an “icebox,” meaning a refrigerator that was not dependent upon electricity but had a large block of ice inside of an insulated “box” that kept the food inside cool and from spoiling prematurely.

For those without enough property or in an urban/suburban area, an icebox might be a good thing to have, at least as a backup for the refrigerator.  If you have a little bit of ground, then you may be able to build an icehouse.  I plan on beginning mine about the end of March to the beginning of April.  See, living in Montana, where there are no building codes in rural areas, I’m not hindered by the need for permits or the usual parade of bloodsuckers from local or state governments or neighborhood (incarceration-hood, is more appropriate) associations.  Thus, the benefit of living in a remote state, I can build whatever I want and nobody can say anything to me.

Use This Easy Method to Make Large Blocks of Ice

If you don’t have this, then you’ll have to negotiate around whatever “primates” are blocking your path and secure whatever permits you believe necessary if you want it done.  I’m going to wait until the time I mentioned and then clear out the ground and the snow, use a “C” to dig (a miniature backhoe) the icehouse out, and then build it during the winter months.  The reason is that I will make about a dozen and a half “molds” to fill with water for my ice-blocks, using large bins.  When the water freezes and huge blocks of ice are made, I will then place them inside of my icehouse and cover them up with lots and lots of sawdust.  Each block will have about 20 gallons of water, and this will be (at 7.6 lbs. per gallon) about 150 lbs. apiece.  A lot easier to let the winter freeze-up those blocks!

I plan on placing in a drain into the floor (PVC drain tile) with a small slope and then tamping the earth back into place.  Then I’ll separate the main chamber for the canned goodies from the ice chamber in the rear and slightly lower than the main room.  Stacking the blocks up and then covering them all with sawdust, it will adhere to the time-honored principle of the frontier days…it will keep all spring and summer, and have to be replaced in the fall (it’s below freezing here in September…we only have about 3 to 4 months without ice and snow).

I’m going to use the earth and rocks excavated and then mound it up, as most of the efficient designs I have seen are with rounded or semi-rounded forms/tops.  The only true modern “accouterments” I plan on having are a good door and door-frame that is sturdy, and I’m considering some kind of interior flooring system.  Any suggestions or personal experiences?  We’d love to hear them, and perhaps you’ll be able to float me some information I can use.  I have a few not-so-near neighbors that are diabetics and use insulin…what could be better than being able to preserve their insulin for them in my icehouse if the SHTF and they lose electricity?

An icehouse or icebox for you and your family may be a good thing to do to enable that your refrigeration lasts…beyond the lifetime of the power plants and power stations…. if the SHTF.  Bottom line: do what you can with what you have.  Better to get into the batter’s box and take a swing than not to take a chance.  Keep fighting that good fight!