It’s reminiscent of the Hoovervilles of the Great Depression and as our current depression worsens, and Americans lose the ability to pay their mortgages or buy food, we’re going to see more of this. Fittingly, this story comes to us from President Obama’s reported birth state of Hawaii: 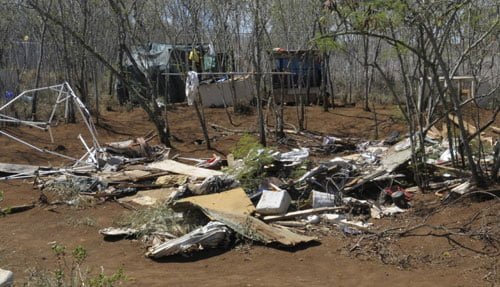 The strip of land is bounded by Waipahu High School on one side and the calming waters of Pearl Harbor’s Middle Loch on the other, where the Navy’s mothball fleet sits idle. It’s the most visible portion of an enormous homeless encampment that stretches five miles over approximately 50 acres of city, Navy and state land that serpentines around Waipio Point Access Road, the Ted Makalena Golf Course and the city’s Waipio Soccer Complex and back down to Pearl City in the opposite direction…

Doran J. Porter, executive director of the Affordable Housing and Homeless Alliance, believes more and more homeless encampments like the one behind Waipahu High School are springing up on Oahu as Honolulu police and city officials continue to push Oahu’s homeless off of beaches and out of city parks.

“I don’t know why it would surprise anyone that they’ve found these places,” Porter said. “You get kicked out of one place, you have to find somewhere else to survive the night. … And now their desperation is starting to show.”

This isn’t the first tent city we’ve seen pop up in the United States. They’re becoming more common as the reality of the greatest depression takes hold: 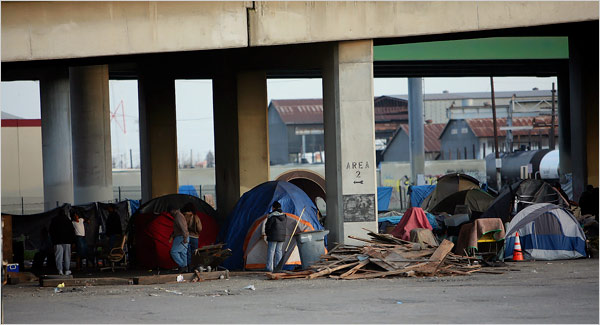 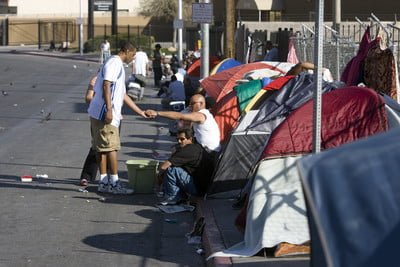 In 2008, MSNBC reported that tent cities were popping up all over the country:

From Seattle to Athens, Ga., homeless advocacy groups and city agencies are reporting the most visible rise in homeless encampments in a generation.

Nearly 61 percent of local and state homeless coalitions say they’ve experienced a rise in homelessness since the foreclosure crisis began in 2007, according to a report by the National Coalition for the Homeless. The group says the problem has worsened since the report’s release in April, with foreclosures mounting, gas and food prices rising and the job market tightening.

“It’s clear that poverty and homelessness have increased,” said Michael Stoops, acting executive director of the coalition. “The economy is in chaos, we’re in an unofficial recession and Americans are worried, from the homeless to the middle class, about their future.”

A full two years later, we’re nowhere near being out of this mess. In fact, we can expect to see this trend grow.

It’s very easy to understand what’s happening here and why the problem will only get bigger. When you lose your job bad things happen. Sure, the government will provide you with unemployment assistance for 6 – 8 months, including food stamps and even state run health care for the kids, but the so-called support net will most certainly fall short of providing you with the comforts you came to enjoy during the boom times of the 80’s, 90’s and early 2000’s. Once the assistance stops – and eventually it does – if you haven’t found a job, you’re choices become very limited.

It’s hard to imagine that after billions of dollars have been spent to fight homelessness and hunger in America, we’re actually seeing an increase in homeless and hungry people. As government spent billions to “save” and “create” jobs, we’re losing more of our workforce every month.