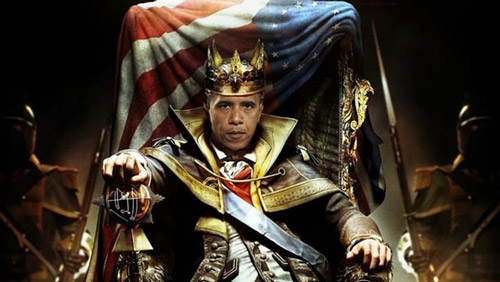 Yes, we are all well aware the Constitution limits the Presidency to two consecutive four-year terms of office.  Then again, if you weigh the track record of the Obama administration, the Constitution is nothing more than a challenge that he bypasses and circumvents with every given opportunity.  Small wonder that he may very well do the same thing with the upcoming presidential elections.  Already a sham, the presidential elections are actually a vehicle he can use to grab that “Third Term” for himself.

First we’re going to quote straight out of the Huffington Post, an article from August 9, 2016, entitled “Does He Deserve a Third Term?  Obama is S.T.U.P.I.D!”  The acronym “STUPID” is supposed to stand for Super Human, Tough, Unequalled, Proactive, Ingenious, and Demi-god.

No, your eyes did not deceive you: that last was “Demi-god,” this article from a “Contributor” to the Huffington Post.  The last paragraph is very alarming, and here it is:

What more can qualify a man as god?  A loving father to his children, best friend to his wife, a friend to his subordinates, a mentor to growing young men, hope to the hopeless, a victor in his challenges, the most powerful man on earth, yet a simple man in all his ways.  You will forever live in hearts of all as a god among men.”

Akin to a professional boxing match, the slow and careful buildup in words by the media has begun.  Those sentiments are not a trumpet call, however; they are an echo of the mind of a narcissistic, soft-dictator that has systematically destroyed the United States over the past 7 years.  If you want the source of the reverberations, feast your eyes on this.  David Feherty of the Golf Channel conducted an interview with Obama and asked him some questions about his golf game.  Obama replied to the questions, and added:

“But I’m not quitting my day job.”

Feherty’s response: “Actually you are quitting your day job fairly shortly,” referring to Obama leaving the White House in January.  Obama’s next reply gives it all away.  In the first part, he suggests his golf game might improve.  Then he talks about the presidency (the underlined portion), leaving no guesswork about his true feelings on the matter.

“Then I may get good. I’m being forced out, I didn’t quit,” Obama said.

How do you like that one?  So how could this potentially happen?  Firstly, the states are the ones with either state-enacted provision to suspend elections or emergency powers to do so.  We saw an example of this with the September 11, 2001 attacks where a New York judge suspended primary elections.  We also saw it with “Superstorm Sandy,” where several states either postponed elections or re-stationed polling locations.

Barring such actions or state constitutional provisions, a governor can use emergency powers to postpone an election.  Feasibly under some “extraordinary” circumstance, Obama could direct the 18 Democratic state governors to jump on board and postpone the election.  This is secondary, however, and probably wouldn’t be needed.  Why?

Because Obama has the power to declare Martial Law, reinforced by the NDAA that declares the U.S. in a perpetual state of war against terror.

A false flag is the stimulus that Obama would use in order to suspend the elections and the Constitutional rights.  Make no mistake: there is no “love” for Hillary from Obama, and the election is a sham.  It either comes down to Hillary or Obama, and the entire decision is based upon what the globalists want.

10 USC 331. When a state is unable to control domestic violence and they have requested federal assistance, the use of the militia or Armed Forces is authorized.

10 USC 332. When ordinary enforcement means are unworkable due to unlawful obstructions or rebellion against the authority of the United States, use of the militia or Armed Forces is authorized.

10 USC 333. When a state cannot or will not protect the constitutional rights of the citizens, due to domestic violence or conspiracy to hinder execution of State or Federal law, the use of the militia or Armed Forces is authorized.

And this is augmented as such, here:

House Joint Resolution 1292. This resolution directs all departments of the U.S. government, upon request of the Secret Service, to assist in carrying out its statutory duties to protect government officials and major political candidates from physical harm.

Looking at the situation in the U.S. and the turmoil in the world it will be astonishing if we even make it to the “elections” this November.  Obama does not want to leave the office.  He has not completed his “fundamental transformation” and there are several avenues available to him that have not yet been pursued.  All of them involve a dramatic event that will enable him to suspend elections and remain in office until the end of the emergency (therefore indefinitely).  Your thoughts on the possibilities are welcomed.