Obama vs. Romney: It’s Not Looking Good For the American People or the US Constitution

If you happened to be watching the Live CNN Polling the night of the debate, you may have noticed something odd about the results:

Are we really to believe Ron Paul polled at 0% after having won the CPAC straw poll decisively in February of 2011? 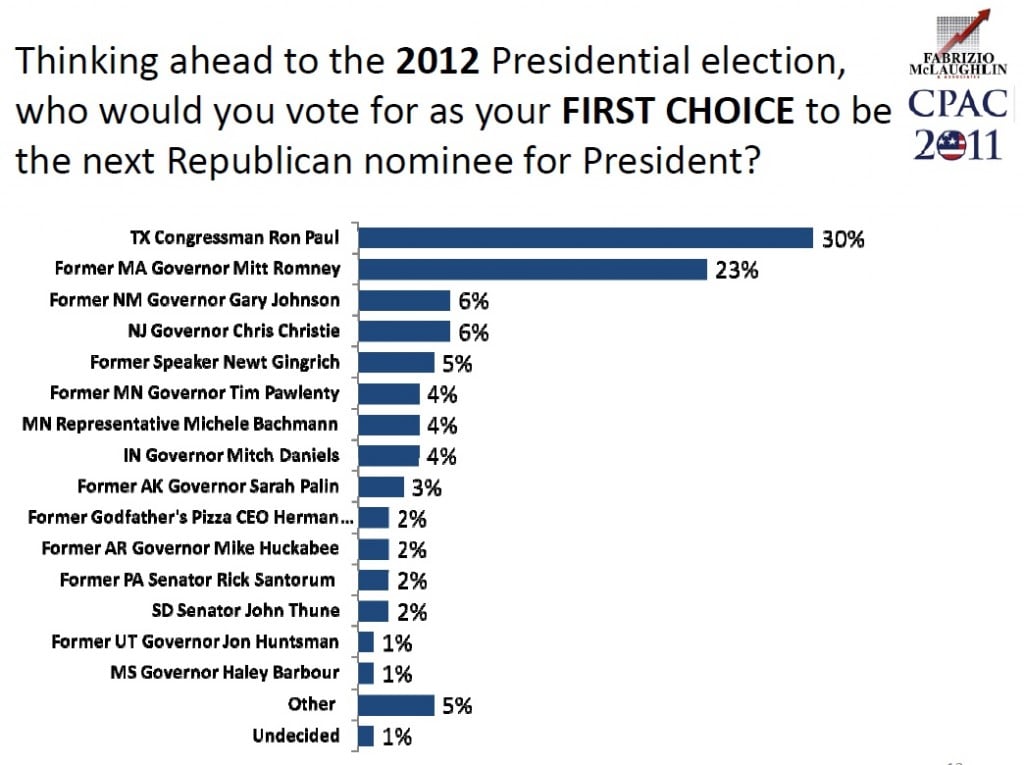 At the very same time CNN ran their “insider” poll showing Ron Paul at 0%, their online poll showed him at 81%. Granted, the online poll could be skewed and we can probably attribute a good portion of those online votes to alternative media readers who get most of their news on the internet, but 0% just doesn’t seem remotely plausible.

There is a concerted effort to diminish Dr. Paul’s standing among republican voters, as has been evidenced time and again by the way his policies and popularity are covered. The left-leaning mainstream media has already chosen their candidates with Mitt Romney leading the pack. As they did in 2008, the media is pushing the republican candidate with the most left-leaning platform of the group, and the one that can be attacked as non-conservative post-primary, just as they did with John McCain. We know how that ended up in the last election, and they’re using the same playbook today.

President Obama’s popularity may have tumbled in the last two years, but when it comes time to hit the voting booths he will still have a large amount of support nationwide. The third party movement – the real third party movement, which can just as easily be called the ‘No Party’ movement – is certainly not voting Obama. And, we’d be surprised to see them vote for a mainstream republican candidate as well this time around.

Mainstream media of the democrat persuasion, which includes CNN, NBC, CNBC, ABC, and CBS know that independently minded Constitutionally-leaning voters are apt to stay home and not vote for the ‘lesser of two evils’ this election. This bodes very well for President Obama, as the republican candidate will need these third party independents to swing the election, so eliminating any possibility of a truly faithful Constitutional candidate from emerging is the immediate goal of the mainstream media (including Fox News) for the next year – until the primaries.

For those who understand that the left and right political spectrum is a tool of tyranny, it’s easy to see that Mitt Romney is just another Bill Clinton, George Bush and Barack Obama. In the end, it really won’t matter all that much whether we have a second Obama Presidency, or a Romney Presidency, because neither one of these individuals will step up to stop the corruption in business and government, the looting of our wealth, and the attack on personal liberties in America.

To review, here’s what conventional education would have us believe is the political spectrum:

Here is the way it actually works:

The traditional left and right paradigm attempts to differentiate between the Republican and Democrat parties. The “True View” shows us that both parties are one and the same in terms of personal, political and economic freedom.

At this time, we remain pessimistic about the chances of a true view right leaning, or even centrist, candidate winning the White House in 2012. And, unless the appetites of third-party / no-party electorate are satiated with a Presidential, or even Vice-Presidential, candidate who they can trust, it is quite possible that President Obama rules (his words, not ours) for another term.

As frustrating, scary, damaging and pessimistic as that may sound, it is what it is. It is still early in the Presidential election cycle and there will certainly be trends and surprises that emerge over the next year and a half, so this assessment is certainly subject to change. But right now, it’s not looking good for the American people or the US Constitution.