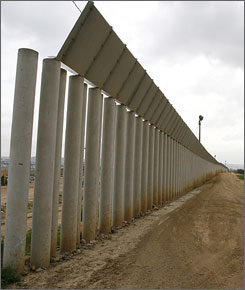 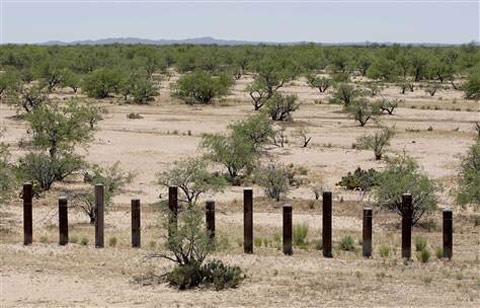 In 2005 then-Governor of Arizona Janet Napolitano famously said that building a wall on the southern border of the United States to stem the flow of illegal immigration would be ineffective. “You show me a 50-foot wall and I’ll show you a 51-foot ladder at the border. That’s the way the border works,” she argued.

That deep seeded focus on domestic security was apparently enough for President Obama to eventually appoint her as head of the Department of Homeland Security, overseeing the safety of the American people.

An actual wall designed to keep unknown individuals and potential terrorists out of the country, however, was never part of the security infrastructure and was never effectively implemented in the years following.

Because, of course, walls don’t work.

Except when you are building them in foreign countries.

Though the broader mainline media refuses to touch this story, it shows just how politicized the debate over illegal immigration in the United States has become.

A wall is apparently good enough to stop Boko Haram terrorists in Africa, but would do little in the way of stopping the rising tide of undocumented immigration into the U.S.

The Diffa assembly proved to be a modest success not merely for its distrustful tribes but also to get a tiny team of fewer than 20 US Special Operations Forces running an experiment which is a part of President Barack Obama’s new counterterrorism strategy.

The soldiers, who helped supply a ring of security and supported the assembly, wear uniforms, as well as don’t go into battle.

They have been gently attempting to help Niger construct a wall against the incursions of Boko Haram and its own recruiting of the youth in Diffa.

In Niger, Nigeria, Chad and elsewhere, they may be performing Obama’s comparatively low-risk strategy of countering Islamic extremists by locating local partners prepared to fight as an alternative to deploying combat troops from the thousands.

To be fair, President Obama and Secretary Napolitano did build a border fence; part of it at least.

In fact, the President made it clear in 2011 that the multi-billion dollar border fence was “basically complete.”

Of course, it was a full year prior to Obama’s statement that DHS, acting under authority from Janet Napolitano and President Obama, actually halted the construction of said fence.

“Not only do we have an obligation to secure our borders, we have a responsibility to do so in the most cost-effective way possible,” wrote DHS Secretary Janet Napolitano in a press release Tuesday. “The system of sensors and cameras along the Southwest border known as SBInet has been plagued with cost overruns and missed deadlines.”

The reported cost of the failed fence was pegged to somewhere in the range of $6.5 billion.

Since then not much has been done to secure the Southern border because of the high-cost of such an initiative. However, it appears that spending billions of dollars on U.S. military personnel and supplies to help Niger secure their country from Boko Haram terrorists by, of all things, building a wall, is a cost-effective undertaking.

Meanwhile, back in the United States, illegal immigration through the completely wide open border with Mexico is reportedly costing American taxpayers some $100 billion per year – fully 15 times what it would have cost to build a border fence or wall.

Undocumented immigrants continue to flood in and the threat of real terrorists originating from the middle east and elsewhere remains at an all time high. In fact, just last year Congressman Jason Chaffetz reported that Federal agents captured four individuals with ties to the Islamic State attempting to cross into the United States.

“There were actually four individuals trying to cross through the Texas border, who were apprehended at two different stations, that do have ties to known terrorist organizations in the Middle East.”

Those are the ones we caught, but how many have slipped through?

According to a report from Atlanta’s WSB-TV2, there are literally hundreds of thousands of OTM’s, or Other-Than-Mexicans, making their way into the United States every year.

We, of course, have no idea who they are, where they are going, or what their intentions are.