Afghanistan has erupted (once again) into riots over the reported accidental burning of Qurans in a Bagram Air Field garbage burn pit earlier this week.

As protests rage across the country, President Obama has issued an apology to all Afghans over the highly sensitive issue:

President Barack Obama apologized to Afghans on Thursday for the burning of Qurans at a U.S. military base, trying to assuage rising anti-American sentiment as an Afghan soldier gunned down two American troops during another day of angry protests.

In the letter, Obama expressed “regret and apologies over the incident in which religious materials were unintentionally mishandled.” Vietor said

White House press secretary Jay Carney told reporters aboard Air Force One that Obama’s apology to Karzai was “appropriate given the sensitivity” of the issue. He said the apology was part of a three-page letter to the Afghan leader. Presidential apologies are rare, but he noted that former White House press secretary Dana Perino apologized on behalf of President George W. Bush in 2008 after a U.S. serviceman shot a Quran.

Across the ocean, some American soldiers and citizens are still awaiting an apology for the May 2009 non-accidental burning of personal bibles belonging to a US soldier who intended to distribute them to other soldiers and residents of Afghanistan. The bibles were apparently confiscated and burned with approval from the Obama administration to prevent sensitivities from flaring.

Additionally, there has been no apology to date from Afghani officials, or those of other middle east countries where the highly sensitive issue of American flag burning has seemingly become a favorite past time: 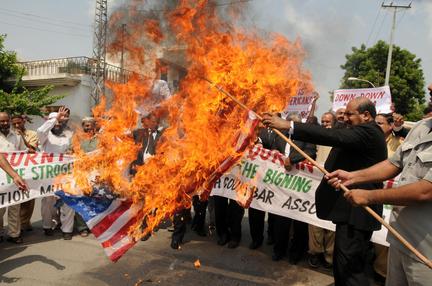 It’s not that we’re necessarily upset about the fact that anyone burned the American flag or Holy Bible (though we’re not exactly overjoyed).

Our inherent rights  to free speech are Constitutionality protected to allow for exactly these types of unpopular activities and expressions. And whether that’s happening in America, Afghanistan or some other mid east country, it’s the god given right of the person doing it to express themselves however they see fit.

But, if assuaging the sensitivities of others is what’s at issue, then it seems appropriate that leaders of countries where in-sensitivities against Americans take place should begin issuing apologies on a regular basis, as well. We don’t recall any such apology ever being issued by a leader of a predominantly Muslim nation.

Moreover, will apologies be issued by Afghan President Hamid Karzai for the death of two American soldiers and others as a result of the riots? We doubt it.

In the case of President Obama and the Pentagon bible burning (or even the case of Obama supporters burning bibles and flags), it seems that sensitivity is only important when it affects anyone other than an American.