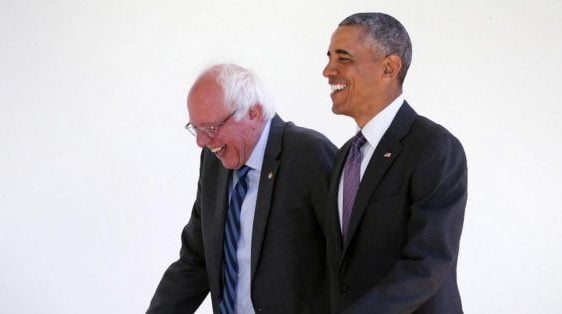 As we noted earlier, a bombshell admission from Politico today exploring Obama’s substantial behind the scenes influence as Democratic kingmaker: included in the lengthy profile on the day-to-day of the former president’s personal office in the West End of Washington D.C. and his meeting with the field of Democratic candidates, is the following gem:

“Obama said privately that if Bernie were running away with the nomination, Obama would speak up to stop him.”

And crucially, when asked about that prior statement reported in Politico, an Obama spokesperson did not deny that he said it.

The frank admission underscores what many independent analysts, not to mention prior damning WikiLeaks DNC disclosures, have pointed out for years: that the establishment controlling the Democratic party has continuously sought to rig the system against Bernie.

“Since losing 2016, Dem elites have waged a prolonged effort to stop Bernie. Bernie is the obvious answer to the neoliberal Clinton-Obama legacy voters rejected…” journalist Aaron Maté observed of the Politico quote.

Here’s the stunning and deeply revealing section in full, which began by outlining Obama’s ‘advice-giving’ throughout meetings with Democrat contenders including Joe Biden, Elizabeth Warren, Pete Buttigieg, Kamala Harris, Cory Booker, and others:

Publicly, he has been clear that he won’t intervene in the primary for or against a candidate, unless he believed there was some egregious attack. “I can’t even imagine with this field how bad it would have to be for him to say something,” said a close adviser. Instead, he sees his role as providing guardrails to keep the process from getting too ugly and to unite the party when the nominee is clear.

There is one potential exception: Back when Sanders seemed like more of a threat than he does now, Obama said privately that if Bernie were running away with the nomination, Obama would speak up to stop him. (Asked about that, a spokesperson for Obama pointed out that Obama recently said he would support and campaign for whoever the Democratic nominee is.)

And a further deeply revealing but more laughable quote comes later as follows: “Obama designed his post-presidency in 2016, at a time when he believed Hillary Clinton would win and Biden would be out of politics.”

Wow. "Obama said privately that if Bernie were running away with the nomination, Obama would speak up to stop him."https://t.co/mBCUhb5Lol

So the reality is… far from the idea that the Dem elites would back the actual nominee the party puts forward, clearly, the die has already been cast against Bernie just like the last time around against Hillary in 2016.

Politico author Ryan Lizza later in the story quotes a “close family friend,” who described that Obama’s “politics are not strong left of center.”

“I mean it’s left, but he’s nowhere near where some of the candidates are currently sitting, at least when he got himself elected,” the source claimed.

This means in the mind of Obama and other top party influencers and kingmakers, Bernie and other popular outliers like Tulsi Gabbard have already long been sidelined. Tulsi, it should also be noted, is one of a couple of candidates who did not bother to stop by Obama’s D.C. office for a ‘blessing’ and advice.