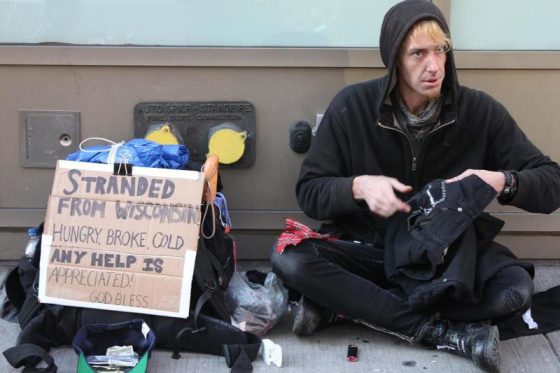 New York City officials have been quietly dumping homeless people to more than 370 cities across 32 states, including Honolulu and Houston.

Under Mayor Bill de Blasio’s “Special One-Time Assistance Program,” (SOTA) local homeless families are given a full year’s worth of rent – which has cost NYC taxpayers $89 million on rent alone since August 2017 – before exporting some 5,074 homeless families (12,482 individuals) to cities as far as the South Pacific, according to the New York Post, citing data from the Department of Homeless Services (DHS).

The city also paid travel expenses, through a separate taxpayer-funded program called Project Reconnect, but would not divulge how much it spent. A Friday flight to Honolulu for four people would cost about $1,400. A bus ticket to Salt Lake City, Utah, for the same family would cost $800.

Add to the tab the cost of furnishings, which the city also did not disclose. One SOTA recipient said she received $1,000 for them.

DHS defends the stratospheric costs, saying it actually saves the city on shelter funding — which amounts to about $41,000 annually per family, as compared to the average yearly rent of $17,563 to house families elsewhere. –New York Post

Critics say the solution has failed to curb the city’s homelessness problem. Moreover, officials in the receiving cities are furious – while some of the homeless families are now suing NYC over being abandoned in ‘barely livable conditions,’ according to the report, which claims that “multiple outside agencies and organizations have opened investigations into SOTA.”

The mayor of Willacoochee, Georgia, was similarly stunned. “I’m not familiar with none of that,” Samuel Newson said.

The mayor of Harrisville, Utah — who was so baffled to receive a call from The Post that she questioned if the reporter had the wrong number — asked if SOTA recipients are connected to social services in the towns where they move.

“Are they just cutting them loose and saying, ‘Here you go’? Or are they making sure they don’t find themselves in the same situation a year later?” Michelle Tait asked. –New York Post

“We were initially seeing a lot of complaints about the conditions. Now that the program has been in operation long enough that the SOTA subsidy is expiring, one of our main concerns is it might not be realistic for people to be entirely self-sufficient after that first year,” said Jacquelyn Simone, a policy analyst at Coalition for the Homeless.

According to DHS, 224 SOTA families have returned to NYC shelters.

“We suggested that DHS reach out to people as their subsidy runs out to confirm they will be secure and not have to re-enter shelter, but the agency told us they have no plans to do that,” said Joshua Goldfein, a legal aid attorney whose firm represents SOTA families who claim they were pressured to move to New Jersey slums.

Homeless individuals and families are eligible for SOTA if they can prove they have been in a New York City shelter for at least 90 days and that their household income is no more than twice what it owes in rent. DHS would not expand on eligibility rules. –New York Post