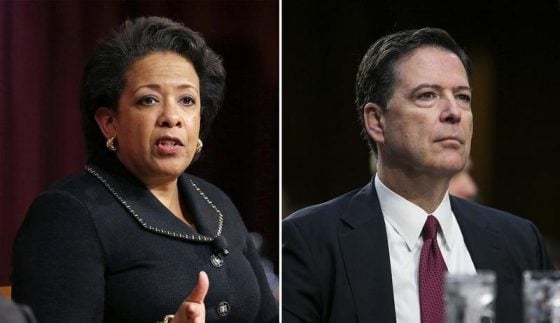 So – once again we’re playing a game of “which former Obama administration official is lying?”

Former Attorney General Loretta Lynch accused former FBI Director James Comey of lying about whether she told him to refer to the Hillary Clinton email investigation as a “matter” instead of an investigation in a September 2015 meeting.

While testifying last year at a closed-door House Oversight Committee hearing last June, Comey said Lynch had pressured him to minimize the significance of the Clinton email probe – an encounter which he says left him questioning her impartiality, and – along with Lynch’s clandestine tarmac meeting on a hot summer’s day in 2016 – contributed to his decision to hold a July 2016 press conference announcing the FBI’s conclusions.

“The attorney general had directed me not to call it an investigation, but instead to call it a matter, which confused me and concerned me,” said Comey. “That was one of the bricks in the load that led me to conclude, ‘I have to step away from the department if we’re to close this case credibly.'”

Lynch, meanwhile, told congressional the House Oversight and Judiciary committees on December 19: “I did not. I have never instructed a witness as to what to say specifically. Never have, never will.”

“I didn’t direct anyone to use specific phraseology. When the Director asked me how to best to handle that, I said: What I have been saying is we have received a referral and we are working on the matter, working on the issue, or we have all the resources we need to handle the matter, handle the issue. So that was the suggestion that I made to him,” Lynch added – telling lawmakers that she was “quite surprised” to hear how Comey would later describe the conversation “because that was not how it was conveyed to him, certainly not how it was intended.”

Lynch was also presented with an excerpt of Comey’s book, A Higher Loyalty, in which he says she “seemed to be directing me to align with the Clinton campaign strategy” during the September meeting and that “the FBI didn’t do ‘matters.'”

“It occurred to me in the moment that this issue of semantics was strikingly similar to the fight the Clinton campaign had waged against The New York Times in July. Ever since then, the Clinton team had been employing a variety of euphemisms to avoid using the word ‘investigation,’” Comey wrote in his book.

“I wasn’t aware of the Clinton campaign strategy on anything,” Lynch responded, adding that she was “not trying to align anyone on any issue.”

As the Washington Examiner points out, “In a report released last year, Justice Department Inspector General Michael Horowitz found Comey was “insubordinate” and “affirmatively concealed” his intentions from Justice Department leadership during the investigation into into Clinton’s private email server.”

Horowitz also found that Lynch’s behavior was concerning, particularly when it comes to the tarmac meeting with Bill Clinton.

This isn’t the first time Comey’s claims have been in direct conflict with his former colleagues’. In April of 2018, Comey’s former Deputy, Andrew McCabe, said that Comey was fully aware that he (McCabe) was making self-serving leaks to the Wall Street Journal. McCabe was fired for lying about it under oath, several times.

“It’s not okay. The McCabe case illustrates what an organization committed to the truth looks like,” Comey told ABC‘s ‘The View,’ adding “I ordered that investigation” which resulted in McCabe’s ouster.

McCabe hit back, saying in a statement through his lawyer that “Mr. McCabe advised Director Comey repeatedly that he was working with the Wall Street Journal on the stories in question…”

More recently, Comey and former CIA Director John Brennan are at odds over who insisted that the discredited Steele Dossier be included in the intelligence community assessment (ICA) on Russian interference.

According to Fox News, an email chain exists which indicates that Comey told bureau subordinates that Brennan insisted on its inclusion, while a former CIA official “put the blame squarely on Comey,” according to the network.

“Former Director Brennan, along with former [Director of National Intelligence] James Clapper, are the ones who opposed James Comey’s recommendation that the Steele Dossier be included in the intelligence report,” said the official.

“They opposed this because the dossier was in no way used to develop the ICA,” the official continued. “The intelligence analysts didn’t include it when they were doing their work because it wasn’t corroborated intelligence, therefore it wasn’t used and it wasn’t included. Brennan and Clapper prevented it from being added into the official assessment. James Comey then decided on his own to brief Trump about the document.”

So – once again we’re playing a game of “which former Obama administration official is lying?”