Not Letting a Good Tragedy Go To Waste, Biden Uses Boulder to Ram Through Gun Ban 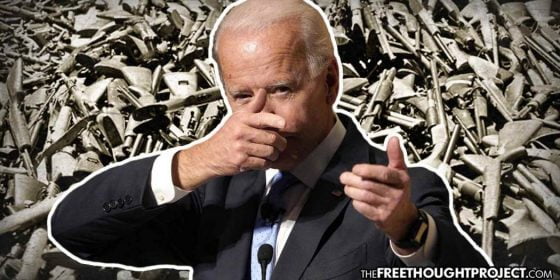 *EDITOR’S NOTE: The mainstream media is predictable circling back to gun control and focusing on all of the mass shootings now as the COVID hoax fears wane. It is all about the agenda.

“The Parkland students and so many other young people across the country who have experienced gun violence are carrying forward the history of the American journey. It is a history written by young people in each generation who challenged prevailing dogma to demand a simple truth: we can do better. And we will,” Biden said in a statement.

“This Administration will not wait for the next mass shooting to heed that call. We will take action to end our epidemic of gun violence and make our schools and communities safer. Today, I am calling on Congress to enact commonsense gun law reforms, including requiring background checks on all gun sales, banning assault weapons and high-capacity magazines, and eliminating immunity for gun manufacturers who knowingly put weapons of war on our streets.”

As Rahm Emanuel famously stated in 2008, “You never want a serious crisis to go to waste. And what I mean by that is an opportunity to do things that you think you could not do before.”

Now, one month after exploiting a two-year-old tragedy, there have been two mass shootings in a week giving the establishment anti-gun crowd plenty of fuel for their fire. Oddly enough, both Biden and Vice President Kamala Harris waited over 24 hours to even respond to the shooting in Boulder. However, when Biden finally spoke, he called for banning “assault weapons.”

“I don’t need to wait another minute, let alone an hour, to take common-sense steps that will save lives in the future and to urge my colleagues in the House and Senate to act,” Biden said in remarks at the White House following Monday’s shooting. “We can ban assault weapons and high-capacity magazines in this country once again. I got that done when I was a senator. … We should do it again.”

But Biden didn’t even need to respond as their army of anti-gun warriors waged a massive campaign on social media declaring that anyone who wanted to keep their guns — is a Nazi. What’s more, they have been preparing anti-gun legislation for an event like this since before the election.

While few details have been released in regard to the tragic shooting that unfolded in Boulder, Colorado, the reactions from the mainstream media and their millions of followers are predictably the same. As the right sends their gratuitous thoughts and prayers, the left lambasts the Second Amendment and calls for restricting the rights of their fellow citizens.

Unfortunately, neither side addresses the issue that could prevent such tragedies in the future which is attacking the reason why a psychopath desires to murder innocent people instead of defending or attacking the tool they used to do it.

Nevertheless, the anti-gun crowd has a slew of tyranny ready to roll out in their futile attempt to stop mass murderers by removing a single tool in a limitless sea of potentially deadly tools. As history has shown us, removing this tool only hurts the law-abiding citizens who are no longer allowed to have them.

As TFTP reported in December, before Joe Biden took office, his administration revealed major plans for eviscerating the Second Amendment. Biden has been an outspoken gun-grabber and on his campaign website, he’s stated that he will use executive action to enforce gun control.

The recent mass shootings will only add fuel to the fire that is the government’s plan to disarm America. While the slogan from the left used to be, “no one is coming for your guns,” it has now shifted into actual policies that lay out exactly how and when they will come for your guns.

The new boss — who is the same as the old boss, contrary to what many believe — is presiding over a Congress that will consider the most tyrannical gun control measures in the history of America, HR127, known as the Sabika Sheikh Firearm Licensing and Registration Act.

As we reported last month, this bill is, without a doubt, the most tyrannical gun control bill ever proposed. Like all gun control measures, this bill would hit the poor and minority communities the hardest. Its massive scope would also turn tens of millions of legal, law-abiding gun owners into felons overnight.

Former vice-presidential candidate for the Libertarian Party, Spike Cohen points out that “HR127 would be most heavily enforced against those with the least ability to defend themselves in court: the poor, and minorities. It will also make things much worse in marginalized communities, where only police and criminals will have guns.”

In a post to Facebook, Cohen narrowed down some of the bill’s most ominous points that would target every single gun owner in the country.

Licensee Must be 21, complete a 24 hour gun safety training course, and must undergo a psych evaluation.

Licensing is revoked immediately for anyone indicted of a crime in which the sentence lasts longer than 1 year.
This heavily discriminates against anyone who has ever seen a therapist or had to get mental health treatment, such as victims of abuse and people with depression, and veterans seeking care for PTSD. Depression and addiction are mentioned specifically as reasons for licensing denial.
Also, gun licensing is expensive, which makes ownership less accessible for those who need their own protection most.

Requires an $800 annual government insurance fee for all current and future gun owners, to be paid to the Attorney General EVERY YEAR.
There is no grandfather clause, meaning this applies to anyone that owns a gun at all, not just those who purchase a new firearm after this passes.
This fee will certainly go up each year. It’s yet another barrier for those in poverty to be able to defend themselves.

ALL firearms owned shall be registered under penalty of up to $150,000 and 15 years in prison.

Serial, make, model, date, identity of owner, and the location of where the firearm will be stored to be collected and maintained in a database by the US Attorney General.

Names and information of all those who may have access to the firearms shall be collected as well.

This information to be accessible by state, local, and federal police, military, as well as state and local governments.

Bans all mags that hold more than 10 rounds
This ammo is mostly used for hunting and is rarely used against people. The most common handguns and rifles use magazines that exceed this arbitrary limit, which makes TENS OF MILLIONS of law-abiding gun owners felons overnight.
Illegal ownership of even a single round of banned ammo will result in up to $100,000 in fines AND 20 years in prison.

This bill was originally presented last year and reinvented this year with a whole new level of tyranny added to it both in the government and out of it. For example, the registration data will be made public. Given the cancel culture mass hysteria-inciting media frenzy as of late, this list could be used by big tech and woke cults to target their political rivals. They could seek out this data and use it to implement blacklists, social media bans, and any other number of ways the cancel culture attacks those with whom they disagree.

As we reported in December, many of these gun control measures are already on the president’s agenda, which will go even further now that mass shootings are back on the mainstream media’s list of hot topics.