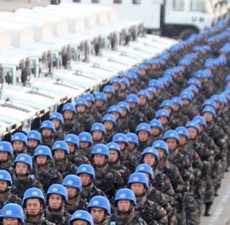 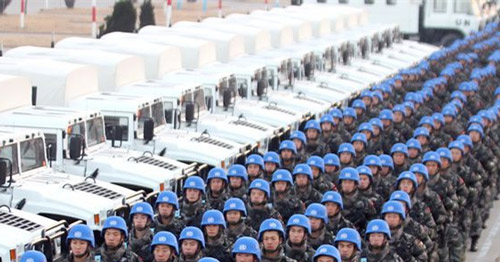 We have previously noted that recent allegations of Russian hacking could mean the Department of Homeland Security will be charged with protecting the Presidential election in November. In fact, as Joe Joseph noted in his latest daily news update, the Department of Defense and U.S. military may be joining DHS to ensure a fair electoral process. Coupled with previous reports that “independent” United Nations observers will be overseeing this year’s vote suggests there may be some legitimacy to the shocking claims you are about to read.

Consider what might happen should a particular candidate be elected to the Presidency, only to have the Department of Homeland Security, DoD or United Nations overturn the vote. And when we say “particular candidate” we are, of course, referring to Donald Trump. With well over 50 million Americans supporting him for the Presidency, if he were to win a decisive victory and then have that victory overturned because of national security issues, one can only imagine the outcry, protests and riots to follow.

The narrative has already been created at the very highest levels of America’s political hierarchy and it is not so hard to envision a scenario such as this playing out.

Should such an event come to pass, would the “transition” be peaceful?

According to a recent alert posted at SteveQuayle.com, the United Nations may already be preparing for such an outcome:

This does not come from a high level source. Just an everyday average Joe. But a guy that works in the same industry, that always gave a hard time about the tin hat-stuff, recently returned from a Great Divide Concert at which a gentleman just passing by, stopped to mingle with this group of
people. They had a couple of drinks, and this guy states, he likes America, he likes the people. He wished he could dance like, the Americans. Laugh.

He states he had been fighting beside US troops over past 6-7 years. And this is why I feel I need to tell someone over here in the states a lil something. He said he was from Norway. And he would be back in 3-4 months as a part of UN troops. He said there was nothing he could do. But felt compelled that he needed to say something, just to let such good people know what is coming. He said that they were going to be going door to door taking guns, or shooting to kill. They already had the lists of names, and addresses.

I have no reason to not believe the words from acquaintance. It actually pretty much freaked him out. He is rather overwhelmed from the conversation.

From his reaction, and as long as we’ve been acquainted, I have no reason not to believe what he was told. I just wanted to pass this on to someone with the means to possibly get the word out.

One of our observant readers from Texas submitted a similar comment recently.

I just heard some really disturbing shit about something going on in Texas down here. I am sorry but I cannot post it. All I can say is that Chinese soldiers have been inching their way closer to all the major cities including Houston, Woodlands, Conroe, and other major cities and our state government knows that we will be under attack between now and the next 3-4 months. A chi-com soldier just threatened someone that I know very well recently and he is not happy about the incident. When chi-coms are telling Americans in my state where they can go from where they can’t go, then we have a BIG PHUCKING PROBLEM. All the military equipment is here in Texas, pre positioned during JADE HELM 15-16 and the soldiers have already been placed in our state and all they have to do is just go out, jump into the UN vehicles and roll out to the major highways, and deploy to neighborhoods. All over 2017 is when the civilians will be getting the worst of it. I know something is up because this link is matching up with what I am hearing.

The UN and Chinese know already in advance that they will be rolling down Hwy 45, Hwy 290, 1960/Hwy 6 from 45 north to deploy to take out these area of subdivision, and one of the biggest major attacks by the UN, and chi-coms will take place between 1960-hwy6-south down to Sugar land. They plan to do the same thing on the Katy Mason rd area, hwy10 area. Good luck when you get to that area.

…We have a very, very serious fucking situation on the horizon.

Now, on its face such claims may sound as if they are coming from the very fringes of the internet. And perhaps they are.

But before you dismiss these claims outright, keep in mind that it has been confirmed United Nations soldiers are actively involved in military training in the United States of America. Moreover, U.N. tank vehicles have been spotted  moving across U.S. highways. The United Nations has even tried to hide the fact that their soldiers and equipment have been deployed to the U.S. as evidenced by the following images showing how they are covering up the logos on their vehicles:

While it’s impossible to know exactly what the United Nations is planning in conjunction with sympathetic U.S. political leaders, we know for a fact that U.N troops are actively operating on our soil and their equipment is already here, laying dormant for whatever orders were to come down the pipeline.

If it turns out that the U.S. Presidential election next month is taken over by the Department of Homeland Security amid claims of a cyber attack on the electoral grid, and is then overturned in favor of Hillary Clinton, then it could well come to pass that United Nations ‘peace keepers’ are activated to quell any disturbance or dissent.

Homeland Security Could Steal What She Can’t Win: “Election Process Is Critical Infrastructure”

Where Is the Proof that UN Soldiers are Actively Operating on American Soil? Oh, Right Here…