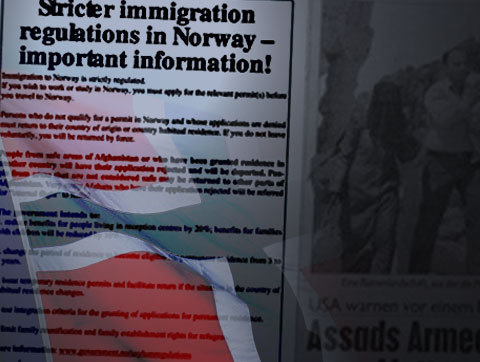 Frustrated with the influx of migrant refugees from Syria, Somalia and other war-torn countries in the region, Norway is leading a new path against the cultural invasion of Europe.

Rather than make empty promises to its citizens about better policies, the Scandanavian nation frequently rated as having the highest standard of living in the world is paying out money for asylum seekers to avert a lengthy bureaucratic wait and just leave instead:

A family with two children is eligible for up to $9,300 dollars – and free flights home, the Norwegian Directorate of Immigration told the media outlet. More than 900 people reportedly have accepted.

“[Refugees] thought that when they came to Norway they would get protection rather quickly,” the head of The Norwegian Directorate of Immigration’s return unit told local broadcaster NRK, The Local adds.

Instead, applications for family reunification can often take years, and an increasing number of refugees fleeing conflict in the Middle East and Africa don’t want to wait.

Norwegian leaders have been actively playing to the idea that refugees will simply not be accepted, and that more should not come.

As The Local reports:

[M]any of the people arriving from Syria, Iraq, the Middle East and Africa expect to receive protection quickly and cannot wait the months or even years the process can take. “They thought they would have the opportunity to work or take an education – and maybe even to get their family to Norway…”

[…] “For a long time, Norway has not been able to forcibly return people to Somalia, but now that we can, I think that more Somalis with an obligation to leave will opt for assisted return.

The UDI’s figures show that more than 900 people have applied to take financial support to leave Norway so far.

The reason that Norway is willing to pay $10,000 per family?

The people of Europe are furious about the pressures coming down on them from the most recent wave of immigration, including those from Syria, who seem to bring with them the worst cases of cultural clashes between Western civilization and Islam.

Norway has even recently taken to putting out advertisements in the countries of origin to dissuade people from trying to come, on fears that they will be turned away:

Norway has begun publishing adverts in Afghanistan’s newspapers to dissuade Afghans from seeking asylum in the Scandinavian country, the Norwegian government said on Thursday. “The goal is to persuade people to not sell all their belongings and put their lives in the hands of human traffickers, because they risk being sent back to the country from which they came,” Joran Kallmyr, a state secretary at the justice ministry, told AFP.

The adverts, entitled “Stricter asylum regulations in Norway” and published in English and the Afghan Dari language on the front page of two Afghan newspapers, explained that people coming from areas of Afghanistan designated as safe or who hold a residency permit in another country will be expelled, by force if necessary.

And there is no doubt that the native population of Europe has been feeling the clash.

Neighboring Sweden has had so many reported incidents with migrants that it has been dubbed the “rape capital of the west.”

Meanwhile, in European countries like Austria and Germany, citizens have been feverishly getting their hands on whatever deterrents they can, with pepper spray selling out during the heat of the crisis.

For Norway, the solution is worth the cost. The incentivized procedure maintains respect for all the individuals involved – certainly compared with other refugee policies – and assists in supporting families who must relocate back home, or somewhere else more inviting.

The International Organisation for Migration (IOM), which processes the Voluntary Assisted Return Programme requests and offers advice and counselling, described it as “safe and dignified”.

There’s nothing to say these refugees won’t simply board the next flight to another country in Europe, but if the policy works for Norway, many other countries may follow suit. Americans, too, will learn the wisdom of a careful balance between immigration rules and the integrity society.

As one of The Local‘s commenters said, it is a “good investment, considering the alternative, paying them and their families from cradle to grave for generations to come.” These socialist European havens “paradises” would disintegrate very quickly if they were overwhelmed with the costs of hundreds of thousands and millions of new refugees who are looking for assistance on every front.