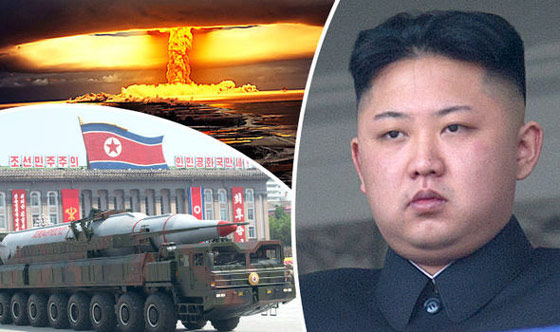 A couple of weeks ago, on January 27, a corporation that monitors North Korean nuclear activity concluded that the communist state has increased activity within its facilities designed to enrich fissile nuclear material.  This specifically means uranium and plutonium, to make nuclear weapons.  Here is an excerpt from that article by David Brunnstrom of Reuters entitled North Korea appears to have restarted plutonium reactor: think tank, as follows:

“Imagery from January 22 shows a water plume (most probably warm) originating from the cooling water outlet of the reactor, an indication that the reactor is very likely operating,” it said in a report.  It said it was impossible to estimate at what power level the reactor was running, “although it may be considerable.”

This comes on the heels of numerous threats made by North Korea’s Kim Jung-Un both before and after the inauguration of President Trump.  The North Koreans have been quietly building stockpiles of fissionable material.  Last year saw almost a dozen missile tests, as well as several nuclear detonations, and Un is not putting the brakes on making weapons, as reported in the article:

“News of the apparent reactor restart comes at a time of rising concern about North Korea’s weapons programs, which could present the new administration of U.S. President Donald Trump with its first major crisis. A report by leading U.S.-based nuclear expert Siegfried Hecker published by 38 North last September estimated North Korea had stockpiles of 32 to 54 kg (70 to 119 pounds) of plutonium, enough for 6 to 8 bombs, and had the capacity to produce 6 kg, or approximately one bomb’s worth, per year.

North Korea also produces highly enriched uranium for atomic bombs and would have sufficient fissile material for approximately 20 bombs by the end of last year, and the capacity to produce seven more a year, that report said. In a New Year speech, North Korean leader Kim Jong Un said his country was close to test launching an Intercontinental Ballistic Missile (ICBM) and state media has said a launch could come at any time.”

As reported in the article, the Secretary of Defense is scheduled to visit Japan and South Korea next week to address this issue.  The President obviously takes it seriously enough that it is not being “shelved” or ignored the way Obama did for the past 8 years.  Read previous articles regarding the assessments of Dr. Peter V. Pry on North Korean capabilities regarding miniaturization of nuclear warheads and their use to deliver an EMP (Electromagnetic Pulse) weapon.

The next world war will be initiated by an EMP device detonated over the continental United States, followed by a nuclear exchange and then conventional warfare.

At the moment, we seem to be heading toward a shift in terms of alliances, although it’s yet too early to clearly define.  There are still problems going on in the Baltic states with what Obama left in terms of US troop commitments and deployments within those nations, and Ukraine is far from a dead issue.  Over the weekend, Victoria Nuland (the co-conspirator in the US-sponsored and directed coup d’état in Ukraine in 2014) resigned her position from the State Department.  It also appears that soon Putin and President Trump will be meeting in person.

This has caused a great deal of angst with the Chinese, who are wary of any potential US-Russian alliance that may tilt against China in the coming months.  The Senkaku Island dispute is also far from over, and the Chinese have been increasingly active in boosting their naval presence both in and around those islands, as well as farther out in the Pacific.  This holds true for surface vessels as well as submarines.  With the rise of President Trump, the Chinese also feel that an “economic reset” may be coming, as well as a potential military alliance with Russia.

Considering all of this, North Korea may seem a trivial issue, but it is not.  If the new administration has deemed it important enough to send the Secretary of Defense into the area to begin talks concerning North Korea’s nuclear activity, then it isn’t a small matter.  This President is not going to allow North Korea to go unchecked as Obama allowed for two terms; however, make no mistake that it is indeed serious.  Reports have been circulating across the web from different defectors in recent weeks that have stated Kim Jung-Un will launch a missile against the United States if he feels that the US will attack him or try to remove him from power.

The North Koreans have made many advances in their SLBM (Submarine Launched Ballistic Missile) capabilities in recent years, with several tests having been conducted in 2016, and tested successfully.

If there is even the possibility that they could launch a missile against one of the cities of California or the West Coast, then it needs to be taken seriously.

Obviously, the President and the Secretary of Defense are taking it seriously.  It is neither fear-mongering or imprudent to be aware of the possibilities (and the mounting probabilities) that exist if North Korea’s actions run unchecked.  This President will not sit back and allow that to happen, but he must deal with a “deficit” in terms of time: Obama allowed (and indirectly sponsored) Un’s ability to buy time and further develop his capabilities.

Decent people wish for none of these things to occur.  It is prudent and pragmatic to keep a wary eye on things every day of the year…and preferably to have nothing happen than it is to skeptically discount things for one day and have something occur.  It is better to be derided for matters such as these discussed and presented in an article not “coming to pass” than to wake up one morning and find that it has happened, and that an entire city with millions of lives has been lost.  Anyone who would wish such a thing to happen should take a good long look in the mirror.

Someone who wishes for such a thing to happen is not thinking of hundreds of thousands of schoolkids or the innocents who would be lost because some totalitarian jerk decided to nuke a city.

I believe this President has done just that: he’s looked in the mirror and realized just how important it is to be the President and act decisively on behalf of the country and the American people.  North Korea is one of his first challenges, and let us hope he rises up to it.  I personally think he will, and there is a lot more riding on such actions than one man’s being “right.”  Millions of innocents do not have a choice in the matter.  We finally have a President who understands this and toes the mark.  When the bell began ringing, he came out swinging.  Finally, a champion for the people instead of the chump we had before.

EMP Attack Would Destroy Civilization: “A Nightmare You’ll Never Wake Up From”