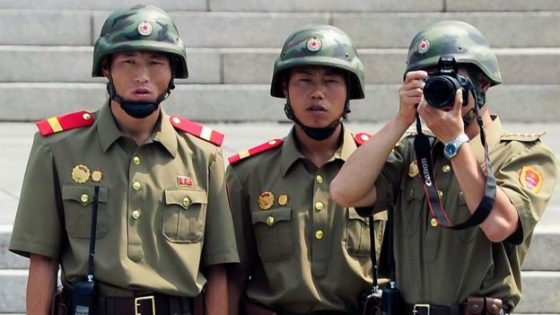 Peace with North Korea could be in trouble, as the authoritarian regime accuses the United States of plotting to invade their poverty-stricken nation. Not only that, but North Korea thinks the U.S. is plotting an invasion while talking with “a smile on its face.”

The U.S. military has called the accusation “far-fetched,” according to the Washington Post. But North Korea appears to be taking recent U.S. troop movements seriously or they are using it as fear mongering propaganda.

Rodong Sinmun, the official mouthpiece of the Workers’ Party of Korea (the authoritarians who have enslaved the public), cited alleged U.S. troop movements in the region, which it called “extremely provocative and dangerous” and said they threatened to derail the dialogue between the United States and North Korea.   citing a lack of progress in getting North Korea to surrender its nuclear weapons. The opinion piece came just two days after President Donald Trump canceled a planned trip to North Korea by Secretary of State Mike Pomeo, although it didn’t mention the canceled trip or even president Trump by name. Rodong Sinmun argued that the acts “prove that the U.S. is hatching a criminal plot to unleash a war against the DPRK” in case Washington fails to achieve denuclearization.

According to the Washington Post, the timing of the opinion piece may be more than coincidence. The media outlets controlled by the Pyongyang regime have been overly careful not to criticize Trump directly since his June 12 meeting with North Korean leader Kim Jong Un. They have, however, been reserving occasional ire for Pompeo and other members of the administration.

Rodong Sinmun cited a South Korean radio broadcast claiming that U.S. “special units” had recently flown to the Philippines, arguing this was a drill simulating “infiltration into Pyongyang.” It also claimed that the USS Michigan nuclear submarine had transported “Green Berets, Delta Force and other special units” from Okinawa, Japan, to the Jinhae naval base in South Korea in late July or early August. –The Washington Post

Colonel John Hutcheson, the director of public affairs for U.S. Forces Japan, said he wasn’t sure what drills the piece was referring to. “U.S. aircraft routinely fly from Japan to the Philippines and other nations around the region for a variety of training and operational reasons, so the notion that any single flight is related to North Korea is a bit far-fetched,” he wrote in an email. Commander Clay Doss, public affairs officer at the U.S. Seventh Fleet, said the North Korean report, including the mention of the USS Michigan, is “completely false.”