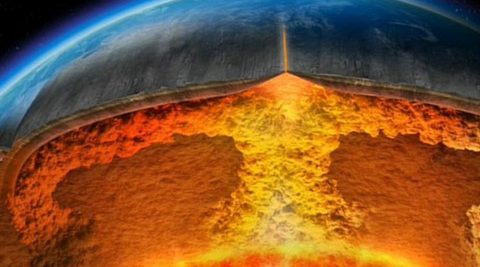 NASA has warned that a catastrophic supervolcano’s eruption poses a bigger threat to humanity than does an asteroid. An eruption at Yellowstone, for example, would be an apocalyptic event – one which human beings have never experienced.

A supervolcano has the ability to “push mankind to extinction” with an eruption, NASA (National Aeronautics and Space Administration) further warned.  The space agency conducted a “thought experiment” called, Defending Human Civilization From Supervolcanic Eruptions.  In it, researchers stated that a supervolcano eruption was more likely to happen on Earth in the future than an asteroid hitting the earth, according to the Express Daily. NASA added: “Supervolcanic eruptions occur more frequently than a large asteroid or comet impacts that would have a similarly catastrophic effect to human civilization.” Jet Propulsion Laboratory researchers found that collisions from asteroids which are more than 2km in diameter occurred “half as often as supervolcanic eruptions.”

A supervolcano is defined as a volcano which is big enough to cause an eruption which could project more than 1000 km3 of material into the atmosphere. The term “supervolcano” was introduced to describe eruptions capable of “plunging the world into a catastrophe and push humanity to the brink of extinction,” according to researchers.

The caldera underneath Yellowstone National Park is perhaps the most famous supervolcano in the United States.  Yellowstone has the capacity to extinct humanity if it ever erupts.

Yellowstone is due for another eruption at any time, and no one knows when. Scientists haven’t even offered much of an educated guess, but NASA did say that they had plans to save the world from Yellowstone previously.  Although they admitted the plan could cause an eruption.

As of now, there is no good solution or fix to an eruption.  Continue to be prepared, as many scientists say that an eruption at Yellowstone would cause a nuclear winter and there wouldn’t be enough food stored for everyone. Researchers have found that if a supervolcano like Yellowstone did erupt, then a “volcanic winter” would ensue. The length of said volcanic winter could surpass the “amount of stored food worldwide,” wrote Express Daily.

Volcanologists claim that MOST volcanoes display warning signs weeks before they erupt, however, some do not.  U.S. Geological Survey Volcano Hazards Program coordinator John Eichelberger told Life’s Little Mysteries: “These signs may include very small earthquakes beneath the volcano, slight inflation, or swelling, of the volcano and increased emission of heat and gas from vents on the volcano. Rising magma causes solid rock to break, sending earthquake signals.”