Mystery: Researchers Have Spotted A Massive Structure Moving Under The Pacific Ocean: “2.5 Miles In Diameter And Surrounded By Tank Tracks” 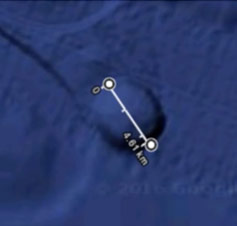 There’s something lurking below the ocean and researchers can’t seem to agree on what it might be.

The object, which measures a massive 2.5 miles in diameter, is slowly moving about 3000 feet below the surface of the Pacific Ocean. What’s more, it appears to have left a 40-mile long trail that looks like it was made by something resembling tank tracks.

What makes the following video of the object even more intriguing is that it looks to have moved along the ocean floor, only to disappear into what appears to be a purposeful blurring of its destination.

According to some researchers, the phenomenon appears to be naturally occurring with one observer noting that the large parallel lines are nothing more than tectonic fissures. “The curvy line is likely the pathway of a underwater current and deposition field of said current,” he argues.

But not everybody is convinced by this explanation. The Secure Team 10 research group, known for their investigations of unidentified objects including those of the flying variety, suggests the object is man-made:

There are certain areas of the ocean that are obviously blurred out. But what better place would there be for another race or another group of beings to hide than in the deep of our own oceans?

While we are up staring at the sky all day and worrying about what’s up there we have 90 per cent of our oceans unchartered.

We have no idea what’s there and we have a lot of mysterious UFO phenomena happening in our oceans.

Some of these tracks truly do seem to have been dug out by something.

We see a large circular object and an obvious path or trail created by it – and it disappears into a blurred out area – how convenient.

Though we can only speculate, the object spotted under the ocean points, once again, to the real possibility that the people of the world aren’t getting the full story.

What do you think – is this a naturally occurring phenomenon, a man-made vehicle, a military experiment, or perhaps a secret hideout for extraterrestrial life?