Must See: “The America You Believe You Live In… Is Not A Reality” 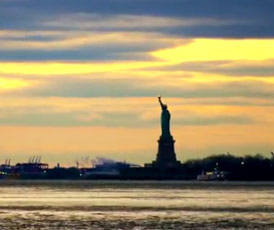 We want to believe we live in the land of the free, but as you’ll see in the micro-documentary from Future Money Trends below, that America no longer exists.

The rule of law has been supplanted. Those who govern do so with an iron fist. They serve themselves at the expense of the people who elected them.

What they teach our children at school and what they disseminate to the general public via the mainstream airwaves is an illusion.

We’ve been told so many fairy tales that the average American is now living in a delusional state. He has been taught that he is free when he is not free. Americans today are forced to buy services from private companies, forced to surrender part of their wages… they even need a permission slip to travel abroad… The average American commits three arguable felonies a day…

The State has become a complete burden on the people and is a vicious master that seems to get away with anything it wants. Some Americans are now  being forced to even pay the debts of their dead parents.

Watch: Life, Liberty, and the Sociopaths that Rule Us

You can view more documentaries like this and stay updated with new developments at: http://www.futuremoneytrends.com/freedom