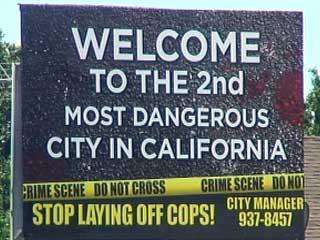 As more towns and municipalities across the country are forced into bankruptcy due to reckless spending and lowered tax revenues, residents of once quiet neighborhoods are waking up to the reality that life as they know it is changing drastically.

In Stockton, California, which declared bankruptcy earlier this year, your chances of becoming a victim of a violent crime such as murder, rape, robbery or assault are 1 in 70, which is nearly four times higher than the national average.

Your chances of being the victim of a property crime are even more likely, with 1 in every 17 residents of the city facing the prospect of having their house broken into or car stolen this year.

This is what happens when a city, county, state or federal government can no longer pay its bills and is forced to lay off workers. In the case of Stockton, the city has cut tens of millions of dollars from their budget, mostly targeting law enforcement and other essential services.

A bizarre shooting spree has broken records in Stockton, making this the most violent year in that city’s history.

…the City of Stockton has seen its most violent year ever – Stockton police tonight are investigating their 56th, 57th, 58th, and 59thhomicides.

“I want people to remember that behind every one of those numbers is a person, and a grieving family,” Silva said.

“This past weekend was obviously one of the most violent weekends we’ve had in Stockton in years,” Stockton police spokesman Officer Joe Silva said.

Silva said investigating teams worked around the clock to solve the grisly crimes, even relying on detectives from other units to help interview witnesses and process crime scenes.

“Right now, we’re working the best we can with limited resources,” Silva said.

“I’ve never seen this many homicides in such a short time span.”

The causes for rising crime rates in Stockton and other U.S. cities like the war zones that are Detroit and Chicago are multi-fold. Criminals are becoming more desperate and aggressive as police personnel are relieved of duty. Likewise, as economic malaise across the country has left millions without jobs or homes, individuals who never would have thought of committing a crime previously believe they are left with no choice but to rob and pillage in order to make ends meet. Add to that the Stress, Anxiety and Depression in a SHTF World and not being able to meet the most basic necessities for life like food, shelter and health care, and you have a population that is ready to snap because they have nothing left to lose.

Stockton is just another example of what the rest of America will look like soon:

The reality is that most of the country has been experiencing a slow decline for a very long time and once thriving cities such as Gary, Indiana and Flint, Michigan have become absolute hellholes.  They are examples of what the rest of America will look like soon.

There are many communities in America today where it seems like all of the hope and all of the life have been sucked right out of them.  You can see it in the eyes of the people.  The good times are gone permanently and they know it.  Unfortunately, the remainder of the country will soon be experiencing the despair that those communities are feeling.

Government officials on all levels are stuck. They are overloaded with debt and have no more money to spend. The only option is to start cutting services like law enforcement, emergency medical response, public food and homelessness support, and other social services like rental assistance.

The effect of this collapse of government services is rising crime across the entire spectrum of criminal activity including murder, theft and organized attacks like flash mobs.

This is more than likely coming to a town near you in short order, no matter where in the United States you live.

Be prepared to secure your home and your person, because government no longer has the resources.