Moderna, Pfizer Hike Vaccine Prices By Up To 25%

Pfizer and Moderna have both made clear that they see their COVID vaccination businesses as long-term profit drivers, not the public service that enabled them to receive billions of dollars in public money to effectively subsidize their development. And now that jabs from China and Russia are facing newfound skepticism across Europe and the emerging world, Big Pharma is showing its true colors, and demanding a massive premium from all buyers of its jabs as Pfizer rolls out its first ‘booster jabs’.

It’s interesting that they’re raising prices, considering that the Pfizer jab hasn’t exactly held up to the original promise of its efficacy.

Despite their original promises not to profit off the vaccines until the pandemic had ended, both companies are now seizing the opportunity to hike prices charged to governments like those in the EU.

According to the latest EU supply contracts seen by the FT, Pfizer raised the price of its COVID vaccine by more than 25% and Moderna raised its price by more than 10%. Both companies are expected to generate tens of billions of dollars in revenue this year as they sign new deals with countries anxious to secure supplies for potential booster shots.

Per the FT, the companies are raising prices now that Phase 3 trial data has showen that their mRNA jabs are more effective than the AstraZeneca and JNJ jabs. But let’s not forget another important factor: that both the AstraZeneca and JNJ jabs have been linked to rare yet sometimes fatal blood clots that have made millions of people wary of taking the jabs. In Australia, for example, the AstraZeneca jab is much more available than the Pfizer jabs…but most patients would prefer to wait, despite the intense lockdowns imposed on the population.

The insider who leaked the data to the FT said the pharmaceutical companies argued they deserved more money because their jabs offered increased “value” vs. competing vaccines.

In reality, Big Pharma is just trying to do right by its shareholders as sales are expected to boom. 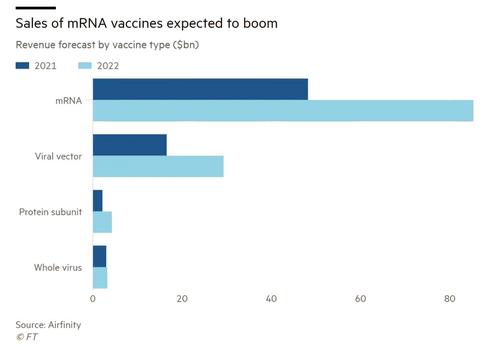 As the FT points out, the EU supply deal was struck at a difficult time for the EU. The AstraZeneca jab that public health leaders had hoped would be the workhorse of the global rollout had been damaged by scandal. The big pharma firms effectively had their government customers over a barrel. What’s more, EU members were grousing about the “unfair” distribution of shots that left some countries short on jabs. 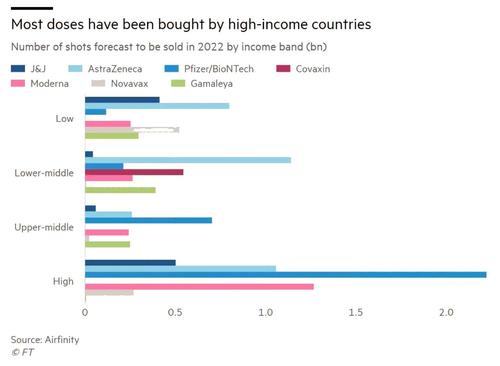 Fortunately for shareholders, sales to high-income countries likely won’t be slowing any time soon as governments prepare to start inoculating minors, and booster shots are being doled out already in Israel.