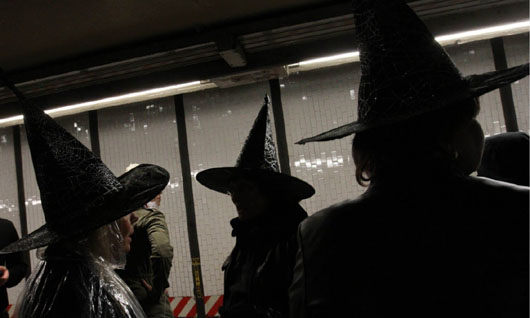 Dozens of witches say they plan to gather in New York City this month to hex Supreme Court Justice Brett Kavanaugh, who was sworn into the nation’s highest court last week.  Kavanaugh’s journey was a rough one, with women coming forward seemingly out of nowhere with allegations of sexual misconduct.

Those allegations (remember, allegations are simply accusations, not convictions) appear to be the reason the witches will gather on October 20 in order to hex the newest Supreme Court Justice. Dakota Bracciale, the Brooklyn-based witch who is organizing the hexing event, said the witches see the hex as a radical act of resistance that continues witchcraft’s long history as a refuge and weapon for the “oppressed, downtrodden and marginalized.” Bracciale is also the witch who organized three hexes against President Donald Trump last year.

“Witchcraft has been used throughout history as a tool and ally for people on the fringes of society who will not ever really get justice through the powers that be,” Bracciale told The Huffington Post. “So they have to exact their own justice.”  Bracciale added that the ritual is meant to be cathartic for alleged victims of sexual assault. Kavanaugh will apparently be the focal point for the hex, but not the only target. The public hex is meant to exact revenge on “all rapists and the patriarchy at large which emboldens, rewards and protects them,” a Facebook page dedicated to the event states.

According to USA Today, about 60 people will be in attendance at the pagan event on Saturday. The ritual will include effigies, coffin nails, graveyard dirt, and a spell, Bracciale told media outlets. Bracciale also said that not everyone in attendance will believe in the power of the hex but that won’t matter. According to Bracciale, the hexing event is, in part, nothing more than a means of spiritual or emotional catharsis. Immediately following the hex, a second ritual will be held, which is called “The Rites of the Scorned One,” according to the Facebook page.  It will “validate, affirm, uphold and support those of us who have been wronged and who refuse to be silent any longer.”

Hexes are “not something you do lightly,” Bracciale said to The Huffington Post, “but it is something you have in your arsenal or toolbox.”