Millions Of Americans Are On The Edge: One Paycheck Away From Financial Disaster 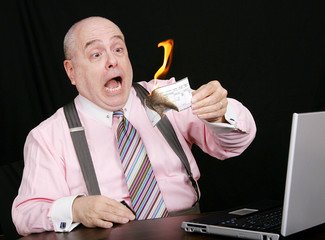 For nearly half of Americans in the workforce, financial disaster would occur from missing just one paycheck. As people continue to live above their means, if the worst happens and they lose their job, many would fall back on dangerous options to make ends meet instead of cutting back their lifestyle.

According to Market Watch, a new study from NORC at the University of Chicago, an independent social research institution, found that 51% of working adults in the United States would need to access savings to cover necessities if they missed more than one paycheck. And this is especially detrimental because not all Americans even have a savings account. Previous research from the Federal Reserve found that 4 in 10 Americans couldn’t afford a $400 emergency, and 22% say they expect to forgo payments on some of their bills. The savings rate in the U.S. fell to 6.5% in March from a recent high of 8.8% in 2012.

Almost half (47%) of Americans said that they would rely on credit cards, or take a loan from family or friends if they missed a paycheck.  And nearly a fifth of consumers would rely on a payday, auto, or another short-term loan. These loans, which can carry interest rates upwards of 600%, can easily trap borrowers in an inescapable debt cycle as they struggle to pay back just the interest.

A similar 2016 GOBankingRates survey found that 69 percent of Americans had less than $1,000 in total savings and 34 percent had no savings at all.  That means many Americans would have to put an emergency expense on a credit card or borrow money another way just to cover the cost of a $1000 expense. –SHTFPlan

About two-thirds of Americans who make less than $30,000 annually would be in a position of financial hardship if they missed a paycheck. “Even so, notable differences remain across race, ethnicity, education groups, and locations and many individuals still struggle to repay college loans, handle small emergency expenses, and manage retirement savings,” the new study added.

The researchers interviewed a nationally representative panel of 1,000 people.  Those conducting the study surveyed those individuals and said the study was designed to be indicative of the U.S. population. The survey provides a sobering look at Americans’ precarious finances. Even as the mainstream media blasts us with news of the booming and improving economy with plentiful jobs. The stock market has also generally continued its upward trajectory this year, putting some financial analysts in a tough spot.  Is the economy good or not? Main street Americans appear to be in a bind.

These “liquid asset poor” households don’t even have enough savings to live at the poverty level for three months if their income was interrupted.

“The 2019 Prosperity Now Scorecard shows that too many families are either struggling to make ends meet, or are just one emergency away from a financial disaster,” it said. –Market Watch

“Short disruptions in pay can cause significant hardship, as most Americans appear to be living paycheck-to-paycheck,” Angela Fontes, director of the Behavioral and Economic Analysis and Decision-Making (BEAD) program at NORC at the University of Chicago, said in the report

Preparing for a financial downturn (be it personal like a job loss, or a financial recession) is easy, yet difficult at the same time.  Save enough to have 3-6 months worth of expenses on hand at all times.  You should also consider paying down any debts that are taking a large chunk of your income away.  These are easy solutions, but admittedly, very difficult to achieve, especially considering 78% of Americans are living paycheck to paycheck.

Dave Ramsey’s book The Total Money Makeover is a great resource for those looking to add a little financial security to their lives.