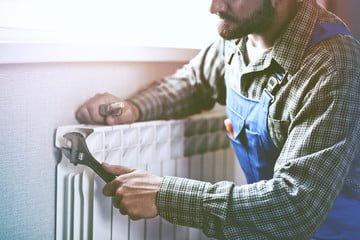 According to new research, millennial dads are less capable than their own dads when it comes to everyday DIY fixes. Millennial dads prefer to rely on professional help instead. Millennial dads are less likely than their boomer counterparts to be able to change a car tire on the side of the road, unblock a toilet or sink, reset a tripped circuit breaker, or even open a stuck pickle jar with their hands. Not only does this lack of basic DIY skill mean home repairs are often left longer unfixed, but it also means millennials are spending more money on things than baby boomers who already know how to do those menial repairs.

According to a report by The New York Post, a new poll of 1,000 millennial dads and 1,000 baby boomer dads found that when a DIY task needed to be done at home, more than half of millennials prefer to call a professional and when it comes to emergency “handiness” scenarios, millennial dads fall short in almost every category. Not only have their overall handyman skills declined, but the quality of the “modern dad’s” toolkit has also declined according to the new survey, conducted by OnePoll on behalf of Alarm.com.

Modern technology got the blame for the decline in handiness skills and the lack of adequate tools to complete the projects. “The technology in the average home has evolved,” says Anne Ferguson, VP of marketing at Alarm.com. “Hi-tech upgrades like smart home technology require professional support, especially safety and security upgrades. Even the handiest dads see the value of partnering with a professional service provider on an important project like a smart home security system.”

Millennials are much more likely to have “smart home” devices too, meaning they will spend more on the devices and the maintenance than baby boomers spend to simply fix a broken doorbell. While boomer dads have the edge when it comes to traditional DIY, 62% of boomer dads concede that millennial dads are better at tech-related tasks.

Because of examples such as this, both generations agree that the definition of a “handy dad” has changed.  79% percent of millennials and 74% percent of baby boomers agreed with that assessment. “Just as dads’ roles have evolved, so has the definition of handiness,” says Ferguson, according to NYP. “Today’s time-pressed dads are quick to master new tools like apps and mobile technology for their families’ benefit. They’re also more likely to outsource time-consuming home maintenance to professionals who have the tools and training to get the job done right — a handy trade-off that enables today’s dads to spend more time with the people they love.”

This could be a sign of the baby boomer generation being more likely to know the skills necessary to thrive, meaning they may be better prepared for emergency situations and catastrophes than their millennial counterparts. It’s difficult to say for sure, considering the survey was only dedicated to DIY projects, however, many of those skills can cross over into a survivalist mindset and it might be something to at least ponder.

I never hurts to know how to do things on your own!