Militant Leftists Are More An Annoyance Than A Real Threat To Liberty: “They Are Incompetent And Fumbling In The Dark” 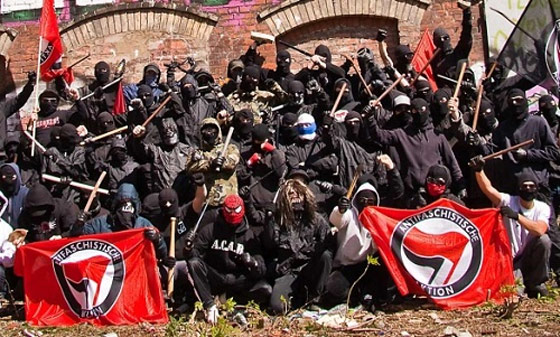 In many articles leading up to the 2016 election I discussed the problem of “escalation.” Namely escalation on the left end of the political spectrum and the people who identify with it (set aside that this spectrum does not exist for the leaders and gatekeepers that exploit it).  In analyzing the consequences of the inevitable Trump win, it was clear that extreme leftists (cultural Marxists) were about to lose considerable social influence and that this would end up driving them to more aggressive measures. This process has happened even faster than I expected.

Cultural Marxists are almost universally distrusted or despised in America today. Their only support seems to come from their own inbred activist circles, Hollywood and certain elements of the corporate and political world.

This does not mean they are going away. Not at all. What it means is that they are going to evolve into something else, perhaps something worse. That said, even if this does occur, I worry that conservatives are putting far too much stock in the threat these people represent. My greatest fear is that conservatives will become so hyper-focused on a militant left that they will forget about the international financiers that instigated this mess in the first place. I also worry that we will one day abandon our constitutional principles in the name of stomping such people into the dirt, using government as our primary tool.

I understand the circus mentality surrounding this issue. The lefties want to “punch fascists” and become some kind of folk heroes in a cultural revolution, so they fabricate images of Nazis and imperialists everywhere in order to rationalize their behavior. Conservatives see this behavior and conjure images of communist hordes overrunning the Republic and building a nation-sized gulag around us, so we want to go out and “punch communists.”  It’s a tale over a century old.

I see an undue level of fear, though, over these cultural Marxists and their real world effectiveness.

I see guys going out to counter-protest little 96 pound, vegan Antifa kids by strapping on ballistic plates or soft body armor, level IIIA helmets and SAP gloves like they think they are going to war. I have to chuckle a little because it showcases the conservative tendency to meet every threat with a nuclear over-response (metaphorically speaking… in some cases).  Remember, in most situations these college-age weaklings have no clue what they are doing, they can barely move around in those skinny jeans they all wear and half of the men identify as women. This is not a group of well trained, bloodthirsty Cheka; they are incompetent and fumbling in the dark.

Opening a high pressure can of whoop ass on such people might be necessary in some instances, but “victory” against them is not going to earn you a place in Valhalla. It may provide some fleeting satisfaction, but let’s be realistic — this is not a war, it is a game… an opportunity to brawl in the streets.

To illustrate my point further, I would like to repost a video that has been making the rounds in the liberty movement recently. Behold! The next phase of escalation in leftist militancy: Learning which end of a gun goes “Boom!”…

The above video posted by the Phoenix John Brown Gun Club was apparently meant as a message of intimidation, but instead it resulted in a roar of laughter. These are the people we are supposed to be afraid of?

Anyone with marginal firearms training will be feeling some cringe right now. There is nothing intimidating about 50 people shooting wildly at a drawing of Pepe The Frog and mostly hitting the dirt hillside instead. It’s hard to become personally proficient with a firearm when you can’t even tell who is hitting what during your “training.”  It is also hard to hit a target when you aren’t shown how to shoulder your weapon correctly or present a proper shooting stance.

I’m a good sport and I’ll give the Antifa kids a few tips: Lean forward into the gun instead of backwards, and STOP gripping the mag well and put your non-shooting hand on the handguard; that’s what it is there for.  Or, just form a big circle during live weapons training and get the friendly fire incidents over with now.

Don’t get me wrong, I have seen poorly managed prepper and militia training as well, but nothing quite to the level of pure suck that comes across in the video above. And I don’t hold it against the people who showed up to the event, I hold it against the incompetence of the trainers.

But let’s get back to the main point of this article.

The John Brown Gun Club does not represent REAL escalation. Not the kind of escalation I have referred to in the past. Most leftists do not grow up in a gun culture and are thus lost when trying to adopt it. When you are barely exposed to the notion of a thing, you are going to be VERY SLOW in learning that thing. When I showed a friend of mine this video they said, “It’s like when Asians immigrate and have trouble driving…” (Is that racist?  Oh who cares…).

Real escalation when it comes to the Left is almost always funded and supported by governments or by elites seeking to use those leftists as weapons for prodding the general population and creating rationalizations for reactionary totalitarianism. I highly suggest skeptics of this idea look into Antony Sutton’s evidenced records and studies into the corporate backing of the Bolshevik Revolution in Russia as well as their backing of the rise of fascism in Europe.

I would also suggest research into more famous and violent leftist activist groups like the Weather Underground; a collective responsible for dozens of bombings and threats against government facilities. Perhaps the most suspicious circumstance of the Weathermen and their seeming immunity in many cases to prosecution is the strange story of Bill Ayers, a leader within the Weather Underground that planned multiple bombings but remains free to this day and is an influential figure among political elites in Washington.

If you think that the racially charged rhetoric of social justice warriors today is extreme or “new,” just look at the rhetoric of the Weather Underground, which included discussions on “killing all white babies” because they were destined to “grow up to be oppressive racists.”  This propaganda has been going on a LONG time.

These are the kinds of groups we should be truly worried about when it comes to the left, and not because they are capable of ever accomplishing their goals. Leftists rely on two things when imposing their will on others — they rely on the power of the mob, the power of government or both at the same time. Right now it is clear that the left has lost the power of the mob. They have no momentum. They were losing any momentum they did have long before conservatives faced off with them at places like Berkeley.

Government and elitist-supported groups, supplied with training and funding, are a greater danger. They tend to operate more like terrorist cells, using bombings, shootings and attrition.

This is not always simply to instill fear or to achieve an actual political aim in support of leftist “values.” Instead, these groups are sometimes injected into the system as a way to inspire conservatives to overreact or to run into the welcoming arms of a waiting dictatorship.

Perhaps the most effective example of the creation and exploitation of violent leftist terror was Operation Gladio, a false flag program running from the 1950s to the 1990s in Europe until it was finally exposed by Italian Prime Minister Giulio Andreotti. Many of the leftist and “communist” cells involved in the numerous attacks on civilians during this period were in fact either manipulated by government agencies like the CIA, or they were created from scratch by those same agencies.

This is not to say that every Antifa and SJW organization active today is some kind of Frankenstein creation of the government.  Most of them are not. As I stated earlier, many of these people are ignorant college kids brainwashed by academia. They are, at most, useful idiots and not a true threat because they don’t have the tools or capacity to present a true threat.

However, a day is likely coming in which Gladio-style leftist groups will be active in the U.S., and they will not be assaulting senior citizens with mere pepper spray, or screaming at Trump supporters and throwing bike locks from sidewalks.

The goal behind such groups will NOT be to “win.”  They are not trying to establish a Marxist enclave. What they really want is to frighten conservatives and liberty activists into supporting extreme measures outside of the constitution and our principles. For once we abandon our principles in the name of “winning,” we will have actually lost everything.

At bottom, the pinnacle threat to liberty is not the cultural Marxists, the SJWs, Antifa or whatever else they like to call themselves. The real threat, as always, are the establishment elites funding and influencing that very ideology, that very mob. Countering the leftists on the street in some situations is useful, but not at the expense of abandoning the fight against the root cancer eating at the heart of our country.  Until the moneymen and political criminals (on both sides of the aisle) are dealt with, the waves of angry leftist dupes and their more dangerous Marxist cells will never end.  Fighting the left while ignoring the greater demon is an eternally foolish strategy.