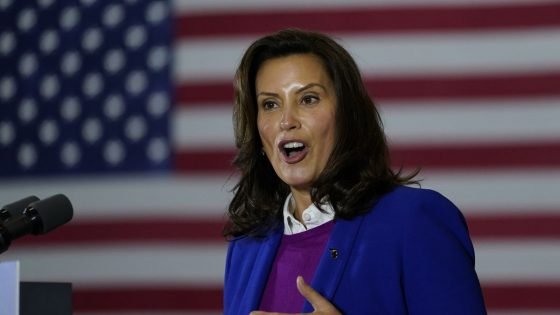 Michigan tyrant governor  Gretchen Whitmer is just another ruler who thinks that what she dictates should be immediately obeyed by all peasants, while she open flaunts the fact that she is above those same rules.  Whitmer claimed she “forgot” her own commands the slaves are expected to follow because she was “vaccinated.”

Lockdown-championing Michigan Governor Gretchen Whitmer was called out for hypocrisy after a photo of her huddling together with 12 other people at a table in a bar in East Lansing, Michigan surfaced on social media. The image was shared by Detroit journalist Chad Livengood, who said it was posted on Facebook on Saturday but has since been deleted.-RT

A photo surfaced on Facebook last night of @GovWhitmer sitting at a table of 13 people at the Landshark bar in East Lansing.

A couple of people sent me screenshots. The original photo was deleted. pic.twitter.com/uOYPfyqKYw

Whitmer attempted to hide the fact that she intentionally flouted her own rules by ensuring the photo was deleted and only screenshots remain as evidence of the tyrant’s “some people are more equal than others” stance.

The seating arrangement in the photo above is in direct violation of Whitmer’s strict social-distancing rules for dining establishments, which currently allow a maximum of six people to sit at one table. In addition, tables cannot be moved together and should be at least six feet apart from each other.

REACTION: After a photo surfaced of @GovWhitmer at a table in an East Lansing bar with a dozen other people, seemingly against her own COVID orders, her press secretary released this statement from Whitmer:@9and10News pic.twitter.com/fePStJvfK8

“Because we were all vaccinated, we didn’t stop to think about it,” the governor said, adding that it was a mistake on her part. But another tyrant, Dr. Anthony Fauci says the vaccines don’t work, because you still needed a mask until his recent flip flop on the issue.

Not to mention, people in Michigan are still getting COVID-19 after being fully vaccinated and dying:

Whitmer is rightly being called out as the totalitarian slave master she’s acting as.

“No one is against having fun. We are against your rules that never seem to apply to you,” one person said.

Another poked fun at Whitmer’s attempt at damage-control: “I hope every lawyer will use this defense when fighting her idiotic fines for their clients.”

I hope every lawyer will use this defense when fighting her idiotic fines for their clients. https://t.co/sUnAdb4x4m

Whitmer has been known for being a tyrannical dictator and enslaving Michigan since the COVID-19 scam presented her with an excuse to do so.

Last month, it was revealed that she took a personal trip to Florida while her government was warning constituents against traveling to the Sunshine State for spring break. Whitmer’s communications director defended the trip, saying she was helping her ailing father there. Apart from Whitmer, at least two of her senior advisers faced backlash after they were spotted hitting the beaches outside the state, in Florida and Alabama. –RT

Whitmer has announced plans to “reopen” Michigan, but don’t hold your breath.  This lady thrives on her power trips and so far, enough have fed her ego to keep her issuing commands and edicts.

Stay alert and aware.  We all know by now that government is slavery and Whitmer is helping us realize it day by day. Stay prepared.  It’s doubtful these petty tyrants are done trying to convince us to bow to them.