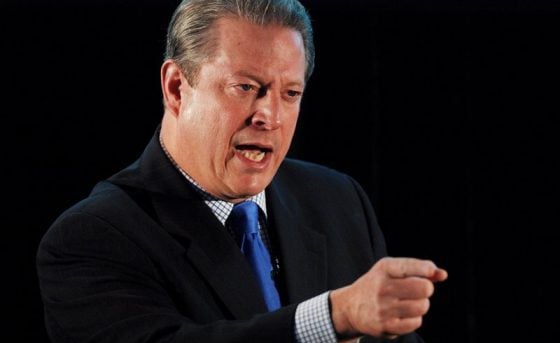 Liberal fear mongering climate change alarmist, Al Gore, was put firmly in his place by meteorologists. After outrageous claims by Gore that winter storms and global cooling are because of “climate change,” a few meteorologists decided to blast the elitist with some truth.

After record cold temperatures gripped the United States and brought temperatures as low as -47° F in North Dakota, frozen sharks in Massachusetts, and iguanas falling from trees in Florida,  Al Gore blamed global warming.  The infamous fear mongering elitist cited one scientist to the effect that this is “exactly what we should expect from the climate crisis.”

But what can you expect from someone who relies on Fake Nobelist Michael Mann? pic.twitter.com/hVzyEZaear

The article was written by Dr. Michael Mann, a professor of atmospheric science at Penn State University. Mann argues that heavy lake effect snows this year near the Great Lakes are a sign of global warming because the warming temperatures cause the lakes to stay warmer longer, therefore, producing more snow. He also argued that despite the recent cold snap, the U.S. has seen many more days of very above normal temperatures than very below normal temperatures over the past several years.

Mann also blamed last week’s major east coast snowstorm on warmer-than-normal ocean water. These allegations, however, are more narrative, propaganda, and opinion rather than fact, according to meteorologist Joe Bastardi.

And Kevin Trenberth, of America’s National Centre for Atmospheric Research, put Gore firmly in his place as well, making “climate change” look like the junk science it has been. Trenberth says that “winter storms are a manifestation of winter, not climate change.”

With little fact behind their opinions on science, climate alarmists are now worried that their “science” won’t be taken seriously because other credible scientists are pointing out their flaws in ideology like Mann’s.

“Such claims make no sense and are inconsistent with observations and the best science,” University of Washington climatologist Cliff Mass said of claims made by Mann and others. “The frequency of cold waves have decreased during the past fifty years, not increased. That alone shows that such claims are baseless.”

“And on a personal note, it is very disappointing that members of my profession are making such obviously bogus claims,” Mass said. “It hurts the science, it hurts the credibility of climate scientists, and weakens our ability to be taken seriously by society.” -News li

So once again, climate change is proving itself wrong with the help of those who promote it.