McMaster Responds To Wapo Claim That Trump Shared Highly Classified Intel With Russians: “I Was In The Room, It Didn’t Happen. The Story Is False” 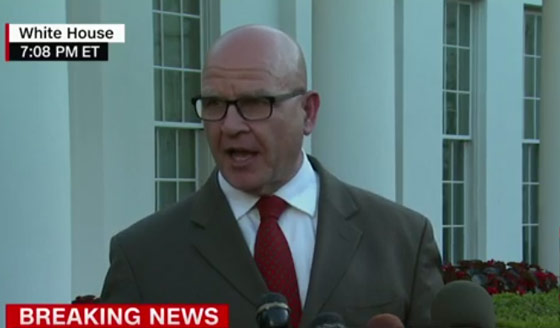 Editor’s Note: Earlier today the Washington Post published a report claiming that President Donald Trump shared sensitive intelligence information with the Russian ambassador during their meeting at the White House over the weekend. Our immediate thought was that Washington Post was running yet another fake news story in an effort to discredit the President. That initial skepticism has now been confirmed by a report from Zero Hedge. As you’ll read below, Nation Security Advisor H.R. McMaster, who was in the room, has patently denied the WaPo claims as totally false. Who would’ve guessed….

Following the latest provocative story from the Washington Post earlier suggesting that Trump shared “highly classified information” with Russian Foreign Minister Sergei Lavrov and Ambassador Sergey Kislyak during their White House meeting last week, National Security Advisor H.R. McMaster just spoke to reporters outside the White House to offer an unequivocal denial of the story: “The story that came out tonight as reported is false. I was in the room.  It didn’t happen.”

“There is nothing that the President takes more seriously than the security of the American people.

The story that came out tonight as reported is false.  The president the foreign minister reviewed a range of common threats to our two countries, including threats to civil aviation.

At no time, at no time were intelligence sources or methods discussed.  And the president did not disclose any military operations that were not already publicly known.

Two other senior officials who were present, including the Secretary of State, remembered the meeting the same way and have said so.  Their on-the-record accounts should outweigh those of anonymous sources.

Of course, McMaster is clearly working for the Russians and we’re almost certain that anonymous sources will approach Wapo with evidence of such at some point in the very near future.