McGrath: “We Live in a Time in the United States Where Nothing Is What It Seems” 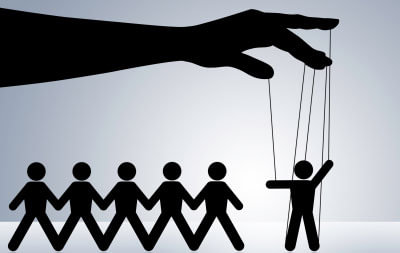 Every message we get from the mainstream media, or a White House press conference, or even from those we may talk to on a daily basis has been specifically designed to manipulate our sentiment and outlook. Most of the time, your friends and coworkers don’t even realize they’ve become a propaganda mouthpiece for an agenda set forth by government or business interests.

Even a precursory examination of what political leaders, economists, and the mainstream media have been telling us should make it clear that we are in the midst of one of the greatest mass deceptions of a country’s populace in the history of the world.

The lies and half truths now pervade every aspect of our lives.

As Charlie McGrath of Wide Awake News notes, the consequence is a population that has been left helpless and under the direct control of their masters.

We certainly live in a time here in the United States where nothing is what it seems… where the truth is taken and massaged and manipulated, spun up, and handed to the people… and it doesn’t bear any resemblance of truth by the time we evaluate and look into the details of whatever was being sold in the first place.

We live in a time of bait and switch, smoke and mirrors deception.

We’d be far better off now to go through a collapse then we will be five years down the road… because every single day that passes in this country the lies continue to mount up, but so does the debt, and so does the misery.

The mainstream establishment media wants you to believe we are on the cusp of a sustainable recovery, or in fact we are in one…

But you can’t hide the numbers…

The truth is we are not on the road to recovery. We are making a bunch of zombies out of the people of this nation and it’s becoming far, far worse.

Consider this… We have more people on the welfare rolls right now in the United States than we have full time workers… 49.2% of all Americans receive a check from the government… we have 1.2 million students who are homeless in this country, allegedly the richest country on earth… over half the students in this country are considered to be living in low income homes… the gap between the rich and the poor has never been as high as it is right now.

So, collapse now… absolutely it would be a bad thing. But if we wait into the future it’s going to be far, far worse.

In a truly free market our financial, economic and monetary systems would have already collapsed. The bad debt would have been wiped out of the system and nature would have re-balanced the equation.

Our political and economic leaders chose, instead, to manipulate everything from monetary policy to perception in an effort to make us believe the system has been stabilized.

It’s been smoke and mirrors from day one, and now millions more have been impoverished and put squarely under the thumb of government dependence.

In the year 2000, when the tech bubble stock market crash began, there were about 17 million Americans depending on government food stamp assistance. Today that number has nearly tripled, to 48 million people.

We now have more people than ever before helplessly dependent on the State.

What happens when America  finally runs out of money and our creditors refuse to lend us more?

A decade ago the fall-out may have been manageable.

If it happened today, as noted by the US Secretary of the Treasury,  it’d be a catastrophic collapse – the kind that leads to generations of despair, destitution, violence and a complete realignment of our political system.

This is what we face going forward.