McGrath: “If You Think the Crisis of 2008 is Over, Then You’re Falling Right Into the Game Plan” 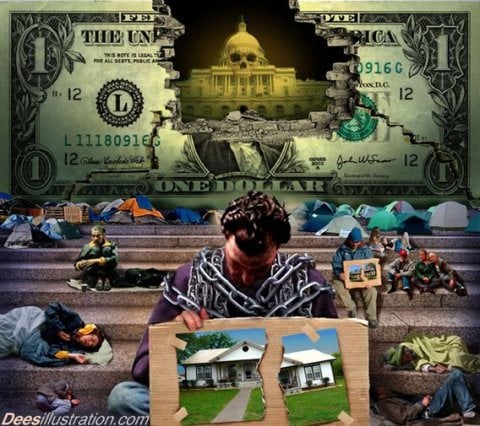 The game is rigged, the pain is coming, and we’re all about to become victims of greed and government once again.

If you think the crisis of 2008 is over, then you’re falling right into the game plan of The Powers That Be.

Washington D.C., the Federal Reserve, any business analyst that can get in front of a camera… wants you to believe that any coming crisis financially is not related to 2008. It’s going to be a new event altogether. And they’re going to blame it on you… the American people.

If you believe that then you have been duped.

Out of the top 25 companies that were heavy into sub-prime mortgages… the leaders and CEO’s of these corporations, to a man and woman, are back in the lending business.

They’re back in the game… You would think some of these guys would be in prison; they’re not. They’re back working at this exact same thing that tanked this country in 2008.

As Charlie notes, these exact same people, the ones who engineered the sub-prime debacle that wiped out the wealth of millions of Americans, are now doing exactly what they were doing before. They’re lending money to unqualified borrowers to the tune of tens of billions of dollars because they say they, “want to help.”

But, as before, they are luring American borrowers into taking on interest-only loans that will lead to more foreclosures and defaults as soon as the payments on the those mortgages reset.

This isn’t about helping Americans. This is about money, plain and simple.

Will we never learn?

The honest answer: no.

There is only one way this is going to end and it’s going to be horrific for 99% of us.

Before you think I am just sounding bitter because these wealthy people [bank leaders] managed to hold on to their money while so many people in this nation saw their standard of living fall, saw their number one investment tank, and saw their future basically be throw into the air in the form of sovereign debt, I’m not.

I’m telling you all this because it’s going to happen again.

A story came out just yesterday showing that the Federal Reserve, this institution that bent over backwards to save the aforementioned individuals and institutions that they work for, now holds more debt… than was ever created in this nation from George Washington through Bill Clinton… $3.4 trillion they now own.

You might think that’s great. You stick them with the bill and walk away.

But that’s not the way it’s going to work.

With this holding of debt they also hold the power over this economy.

Our leaders must understand that this private institution, that is not federal and that has no reserves, is running roughshod over this economy and they’re serving their financial special interest masters on Wall Street because that’s what they’re made up of.

And at the end of the day when this comes crashing down they will be the ones holding all the power.

We need to realize this because this crisis is not over. A far worse crisis is yet to come.

We live in a nation of people who will not step out of their perceived reality, and they are going to pay the price for their ignorance.

In a previous commentary Charlie McGrath warned about the disaster that will soon come our way.

We’re talking about the potential for an absolute credit freeze that will make the situation in New York spread across this country almost overnight.

Ask yourself this question: Are you prepared to take care of yourself?

If you cannot answer that question with the affirmative it is time to stop just listening to alternative media and thinking of it as entertainment, but taking the advice seriously and considering if you have a plan to take care of yourself and loved ones if the situation arises.

Because if you look around this world, if you look at the mainstream media, they’re forewarning you about what’s coming.

There is a disaster coming. Get ready for it. Make sure you are mentally and physically prepared for what is coming.

When the credit markets froze in 2008, then Secretary of the Treasury Henry Paulson warned members of Congress that if something wasn’t done there would be tanks on the streets of America.

Some would laugh at that notion. But this is no conjecture.

Guess what folks… this next go ’round there will be no bail out, no saving the system, and no relief coming.

What’s coming is what the U.S. government has been simulating for the last half decade: A total collapse of our financial system, civil unrest, and the very real possibility of a lock-down of the United States of America in its entirety.