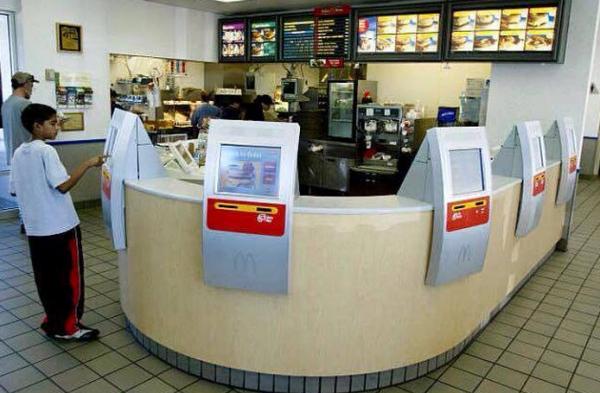 The future of fast food service will involve much less human interaction.

Instead, humans will line up like rats to pellet dispenser, and computer screens will take orders, as the classic menial, entry-level job will gradually disappear along with many other jobs in the workforce.

Former McDonald’s CEO Ed Rensi, who headed the company during the 90s, blasted the push for a $15 minimum wage, which he argued, food companies won’t pay – they just won’t pay it.

And jobs will suffer because of it.

The company will admitted choose to cut jobs altogether, and phase in automated kiosks, rather than pay more in minimum wage. (Perhaps that was their plan all along, and the $15/hour minimum wage controversy is the perfect excuse to put it into action.)

A Former McDonald’s CEO has predicted that raising the minimum wage to $15 per hour will cost people entry-level jobs.

In a column he wrote for Forbes, Ed Rensi says… “it will mean wiping out thousands of entry-level opportunities for people without many other options.’

Labor organizers have been demanding an increase in wages… Rather than raise prices, McDonalds is more likely to replace people with self-service computer kiosks so they do not have to pay the high wage. […] Over a million American youths may otherwise be out of a job.

‘You’ll see their legacy every time you visit the Golden Arches, where “would you like fries with that” is a button on a computer screen rather than a phrase spoken by an employee in their first job,’ he wrote.

Admittedly, McDonald’s has already cut thousands of jobs in Europe, where it put in more than 7,000 kiosks to take orders rather than pay wages.

And you can bet that there is much more of that sort of thing coming.

From the company perspective, it is obviously a matter of the bottom line. For society, it is an unfortunate perfect storm as automation alone is poised to destroy millions and millions of jobs.

The future just doesn’t need many burger-flippers and order takers – the computers do it much more efficiently and accurately, after all.

Could they cut money elsewhere – like from the salaries and bonuses of overpaid CEOs? Of course.

But that’s not the point, and it won’t make the difference. These companies simply don’t care… and the economics are against anyone caring ever again.

It is harsh, but true. Please brace yourself as best as you can for this looming change in our society.

As Zero Hedge reported, McDonald’s has already been rolling out test kiosks in Chicago, and as the above article noted, in Europe as well:

According to Brand Eating, fast food king McDonald’s has been spotted testing a self-serve McCafe coffee station/kiosk out in downtown Chicago. The station is located in the restaurant but apart from the counter and looks to be a theoretically more convenient way for those who just want a cup of coffee to skip the regular line (while also freeing employees from having to make each drink in the back)

In essence, this is the company’s latest venture to make employees responsible for one less task as corporate HQ slowly but surely responds to minimum wage hikes sweeping all states, and in the process, outsource its minimum wage workers to simple machines which will never unionize or have any demands aside from being cleaned occasionally.

That site, of the self-serving kiosk, is already familiar at many grocery stores and Wal-Marts, and will become a mainstay of the shopping experience in all sectors, along with driver-less cars, and somewhere, unrecognized by the media, an endless line of former middle class and working people desperate on food stamps and benefits.

It is all happening so fast… before we know it, it will have happened.

Where will everyone go? What will they do?