Market Crash In the Works: “A Canary May Have Just Keeled Over” 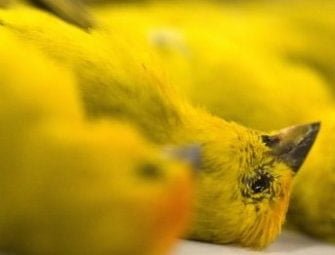 As holiday shoppers raided Black Friday sales and internet retailers ahead of Christmas, the establishment media heralded a new era of economic boom for the 2013 shopping season.

But things are not at all as they may seem if all you do is follow official government statistics and propagandized mainstream news report.

In the week leading up to Christmas, for example, retail analysis firm ShopperTalk advised that brick & mortar retail traffic was down over 20% this year.

Some would argue that much of this foot traffic jumped to the internet to make their holiday purchases, but according to the National Retail Federation sales online were only slated to rise 3.9% this year, which is nothing to write home about considering annual retail sales for the last 10 years rose an average of 3.3%.

Consumers, it seems, are starting to feel the pinch of widespread job losses, wage reductions, cuts to government assistance and termination of unemployment benefits for millions.

It is affecting all consumer markets.

The National Association of Realtors reported that the month of September saw its single largest drop in signed home sales in 40 months. And that wasn’t just a one-off event. This month mortgage applications collapsed a shocking 66%, hitting a 13-year low.

Something is amiss, and despite claims of economic recovery emanating from pundits far and wide, the numbers on Main Street, where they really matter, suggest that we are in for a rough ride.

Eric Peters Autos, which analyzes political and economic trends, notes that trouble is brewing all over and it may soon have an overt impact on what many consider to be the only measure of economic health in America: rising stock markets.

A canary may have just keeled over. Not in the coal mine – but in the stock market.

Shares of Ford – healthiest of the Big Three automakers – are down 8 percent, according to Bloomberg. And it’s not just Ford, either. GM, Honda and Toyota stocks are down, too.

Could it be related to the gloomy news that the number of new mortgage applications has just hit a 13 year low? That the yield on 10-year U.S. Treasuries is a barely break-even-with-inflation 3 percent? That there are almost1.5 million fewer Americans employed full-time today than there were in 2006, even as the population has increased by 16 million since then?

The buying power of the average American – not just his ability but his inclination – is the decisive factor. And the buying power of the average American is going down – not up. Lower household income; higher cost of necessaries (food especially). Higher – and new – taxes (in particular, the ObamaTax). The very real specter of Zimbabwean inflation at any moment. It is enough to give a sensible person pause.

Interest rates? Forget about it. When they begin their inevitable uptick – expect this to happen by summer – it will be impossible to sweep under the rug.

And it will probably do to the car industry’s fortunes what Bernie Madoff did to his “investors.”

Grab onto something. It’s going to get bumpy.

Any way you slice it, whether it’s car sales, home sales, retail sales, employment, or monetary stimulus, the warnings are everywhere. The canary in the coal mine is going into cardiac arrest.

Back in 2007 trend forecaster Gerald Celente warned the world of the “Crash of 2008.” He based his analysis on many of the aforementioned data points. We’re seeing a similar pattern develop in late 2013, suggesting that 2014 could be the year it all goes critical:

There’s fear and hysteria running through the entire global financial community, because as everybody knows all they did was postpone the inevitable.

I’m saying to everybody out there, If you don’t have your money in your pocket it’s not yours.

And as for the international scene… the whole thing is collapsing.

We are saying that by the second quarter of 2014, we expect the bottom to fall out… or something to divert our attention as it falls out.

Moreover, if you were to compare stock market charts from 1929 to present day, you’d note that they are eerily similar:

Our economy as it exists today is wholly unsustainable. The government and Federal Reserve will soon run out of bullets and their efforts to stabilize the system will be revealed for the abject failures they really are.