Man Who Leaked DHS Pictures Branded a Terrorist: “You Will Be Incarcerated” 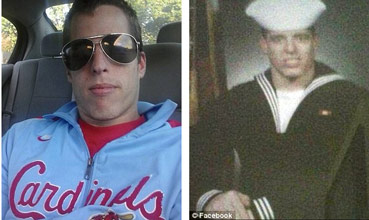 Did you know that taking pictures of Department of Homeland Security vehicles and posting them on the internet could land you on a terrorist watch list, or even in prison?

Navy Veteran Mark Paffrath, who recently took pictures of DHS vehicles parked in full public view at the Drury Plaza Hotel in Missouri has been terminated from his job, threatened with imprisonment and branded a terrorist.

Paffrath was on his way to work when he saw the vehicles and decided to snap some photos and a video. Within minutes of uploading the pictures to his Facebook page he was called in by his supervisor who asked that he remove the pictures. But the next day, after Paffrath had already complied with the request by his employer to take down the highly controversial pictures which had already gone viral, he was met by Drury Hotels head of security Jim Bohnert, who promptly terminated his employment.

One of the reasons given was that Paffrath reportedly almost cost the hotel a $150,000 contract with the government.

As if that wasn’t enough, Paffrath also claimed Bohnert told him, ”[Y]ou’re a terrorist and you have dishonorably served your country by posting the photos and video.”

When Paffrath told Bohnert he never put the location of the vehicles on the photos or the video, Bohnert reportedly said “all they have to do is click on your name and see where you work.” Paffrath said Bohnert concluded their conversation by saying “if you repost the photos and video you will have the Federal government knocking on your door and you will be incarcerated.”

The Department of Homeland Security has not commented on the incident and refused to provide details on whether the vehicles were being massed at the hotel in anticipation of the Grandy Jury decision over the shooting of Michael Brown in Ferguson, MO earlier this year. The Drury Plaza Hotel is located approximately 30 minutes from Ferguson. According to local police and the FBI, riots and civil unrest could break out in the St. Louis area following the decision set to be released this week. 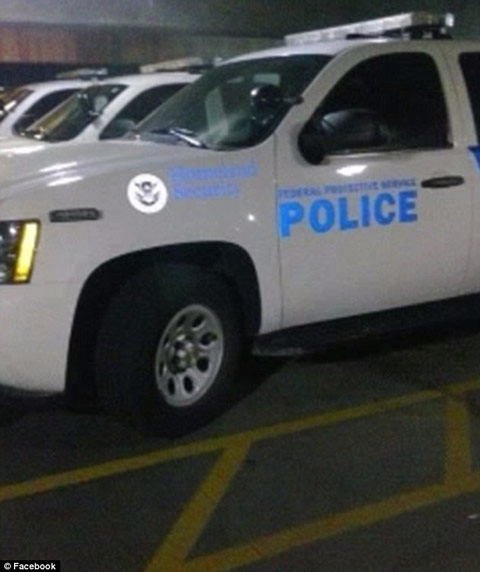 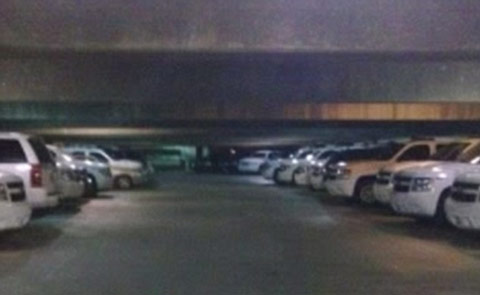 Let’s be clear about what happened here.

Mark Paffrath was driving to work and entered the parking garage, presumably at his workplace. Whether the parking garage was available to the public is unknown, but it appears hotel employees and guests have access to it without the need for any sort of security clearance.

The Drury Hotel provided no guidelines to employees about the purported secret nature of the DHS meeting. As evidence of this, the day after Paffrath took the pictures the hotel shoddily put together a white board of do’s and don’ts for their employees. Among other things, hotel management asks employees not to “brag to your family” about the Department of Homeland Security group after they check out of the hotel: 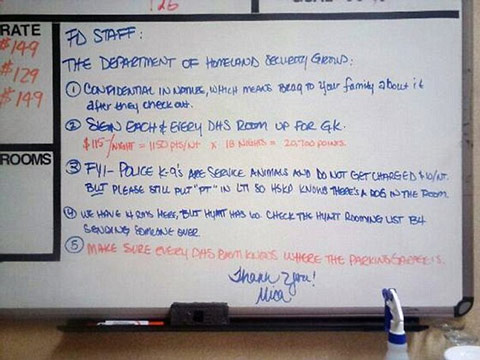 All accounts suggest that no confidentiaility or secrecy agreements were signed by employees of the hotel as it relates to speaking with people not associated with the hotel about what they see during their regular work day.

The DHS vehicles were parked in full view of employees and other guests. 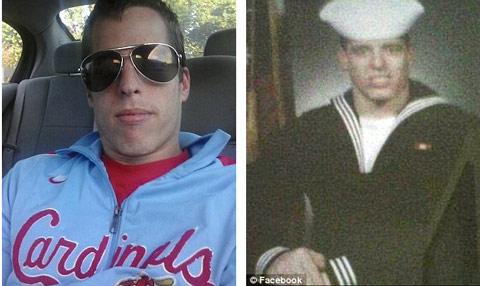 (Pictured: Mark Paffrath served in the U.S. Navy and was deployed overseas)

Mark Paffrath snapped several photos and a video, uploaded them to his Facebook page and was terminated from his job for doing so, even after he complied with a request to remove the offending images.

Moreover, the hotel’s security director branded him a terrorist, something he more than likely did not come up with on his own because who in their right mind would brand someone a terrorist for taking pictures of an SUV, even if it did belong to Homeland Security?

Thus, DHS obviously put pressure on the hotel chain and given the history of their behavior, which includes flagging millions of innocent Americans on terrorist watchlists even if no evidence exists, the first domino in this sequence is more than likely a misguided government official with nothing better to do than target Americans who are simply going about their business.

Mark Paffrath did nothing wrong and his documentation of DHS vehicles through the utilization of a mobile recording device is protected by the First Amendment of the Constitution of The United States of America and has been upheld by the Supreme Court.

But rather than following the letter of the law, we are seeing yet another example of a government that has overstepped its bounds and another large mega-corporation who happily does its bidding.

As we’ve made clear previously, the Patriot Act passed after September 11th under the pretext of stopping terrorism has now been turned on the free people of The United States. The definitions for terrorism are now so broad that a child playing with a bubble gum maker that looks like a gun, a person selling his own brand of silver coins, or a man snapping a picture of a government vehicle are now all on par with ISIS and Al Queda terrorists.